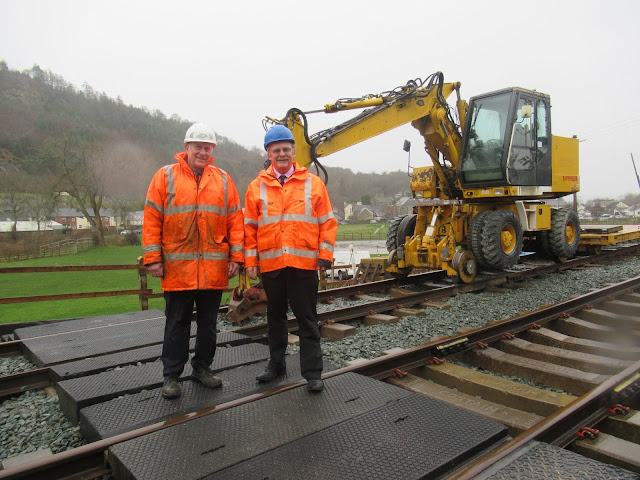 North Wales Assembly Member Mark Isherwood has applauded all those involved in a rail project which will boost the economy of the region after revisiting it and seeing first hand the progress that has been made.

Mr Isherwood visited Llangollen Railway’s major civil engineering project at Corwen Central Station on Friday and was pleased to see that since his last visit, the team of volunteers have moved the project forward massively.

Work completed includes the infilling of a gap in the embankment and the installation of the new track complex over the former void to connect with the station loop line, a notable achievement which completes the ten-miles of line from Llangollen to Corwen.

Commenting after his visit, Mr Isherwood said: “On each visit I am always astounded by what this group of volunteers, with an average age of 68, working on a part-time basis, are able to achieve.

“They were recently awarded a runners up certificate in the Large Group category at the awards ceremony held by the Heritage Railway Association in the face of stiff competition from other railways.

“They are doing a sterling job, in often challenging conditions.  I was impressed to see that they have managed to erect three pairs of restored heritage columns since my last visit in 2018 and prepare for the installation of the final pair which will provide for an eventual canopy around the subway access stairwell. They have also recently installed heritage style lampposts and columns for the new Corwen name board.

“Only with a tour of the site does the size and scale of this project become apparent and I hope that all their efforts will be crowned with success this year when a first train arrives at Corwen.

“The accessibility of the new station to the centre of Corwen and the town's car park will provide the facilities needed to attract more people to the Llangollen Railway and encourage the prospects for local tourism from a wider segment of North Wales.

"My admiration for the project team members, who have tackled all this work over the past five years, grows following every visit I make. Without their dedication none of this would have happened."

Although a date for the opening of the new station is yet to be confirmed, Mr Isherwood was told that only the weather is now holding them back from completing the project.
Posted by llanblogger at 6:33 AM