Listen carefully as I will say zis only once ...

Llangollen Twenty Club are heading back to occupied France during the Second World War for their latest production, 'Allo 'Allo.


This famous farce penned by Jeremy Lloyd and David Croft centres around Café Rene in a small village.

It was a smash-hit TV comedy in the 1980s and is brought to the Town Hall stage from Thursday-Saturday, March 19-21.

Rene, the café owner, is a likeable but weak man who lusts after all his female staff apart from his long-suffering wife, Edith.

He hides two British airmen in the café as they await their chance to escape back to Britain.

Centrepiece of the play is a stolen painting, The Fallen Madonna with the Big Boobies, of which there are copies but the genuine one is so well hidden that no-one but Edith knows where it is.

However, the original is much sought after by the occupying Germans and it is because of that the café becomes a hotspot for subterfuge and various goings-on.

Gestapo man Herr Flick desperately wants it, as does Hitler and there appear to be more than one Hitler doing the rounds - one can count at least four at one point!

Michelle, a smart resistance woman, issues orders to Rene and the bumbling English policeman, Crabtree, tries to keep order and respect.  To no avail.

Characters are all larger than life, from the randy Italian army officer Alberto Bertorelli and the German colonel with a wiglet fetish, to Yvette and Mimi, the two waitresses in the café and the bumbling Leclerc, and from the sinister Herr Otto Flick and his officer "friend" Helga, to the wooden-legged General Schmelling.

Supported by a lively cast of café customers, a capable pianist who links together the scenes and helps herself to the odd tipple, this play is as absurd as only a Croft/Lloyd collaboration can be.

It is humour at every turn, a little risqué and more than a little non-PC.

Twenty Club promises a stunning set, wonderfully funny characters all very true to the original ones and lots of fast- paced action. 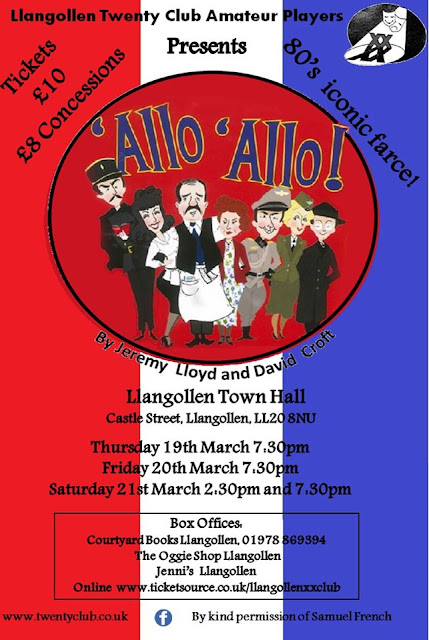 Posted by llanblogger at 8:07 AM