Young 'Uns head back down the Yellow Brick Road 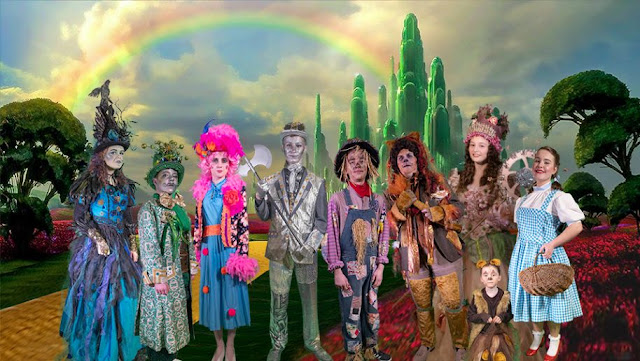 * Main cast members of the Wizard of Oz. Picture by Barrie Potter.

Young ‘Uns, the junior section of Llangollen Operatic Society, are once again dancing down the famous Yellow Brick Road to mark their 30th anniversary.

The evergreen tale of the Wizard of Oz was their first full production back in 1991 and later this month they’re presenting the same show to celebrate their three decades of pleasing audiences.

In their earliest days they had actually presented two reviews, Songs From the Shows – Oliver and Remember When, which had a 1980s theme, before their first full-scale performance.

The group has staged a show every year since, everything from Annie to Bugsby Malone and from Beauty and the Beast to Grease.

Along the way they’ve picked up a host of amateur stage awards, the most recent of which was Best Youth Production Musical Theatre for Joseph and the Amazing Technicolor Dreamcoat in 2018.

Up to 50 enthusiastic six to 18 year olds take part in Young ‘Uns shows each year.

Members are drawn not only from Llangollen but also from a wide range of surrounding areas, including Chirk, Corwen, Glyn Ceiriog and Wrexham.

Many of the Young 'Uns go on to achieve academic qualifications related to theatre work and some have followed a stage career.

Wizard of Oz runs at Llangollen Town Hall from Thursday to Saturday, February 13-15 and features a cast of 47 youngsters accompanied by a full orchestra led by musical director Julian Cattley.

Grace Roberts plays Dorothy, Katie Clark plays the Wicked Witch of the West, Ethan Roberts is The Wizard of Oz, Ethan Le Cheminant is the Tinman, Matthew Humphreys is the Scarecrow and Aled Morris is the Cowardly Lion.

Behind the scenes is a production team led by producer Pam Williams and including assistant producer Dee Smith and co-directors Robin Crowley and Jo Lloyd.

Producer Pam Williams said: “Pioneers of the Young ‘Uns recall that after announcing the new stage group was forming in 1990 they were shocked to open the doors on audition day to find that over 60 young people were waiting eagerly to enter.

“For the past 30 years, volunteers from the Operatic Society have developed this wonderful talent in the Young 'Uns, providing rich, but very affordable opportunities for our members to experience creative and cultural development and to engage in musical performance, dance, stage-craft skills, and dramatic interpretation and presentation, culminating in four performances of an exciting annual show.
“We’re delighted to be presenting the Wizard of Oz to mark our 30th anniversary and it promises to be another exciting and thoroughly enjoyable show.”

Evening performances begin at 7.30pm and there is a Saturday matinee at 2pm.

* Tickets are £12 with £10 concessions. They are available locally from Gwyn the Butchers, Jades Hair and Beauty, Llangollen Oggie Shop and Stella Bond on 01978 860441.
Posted by llanblogger at 6:36 AM