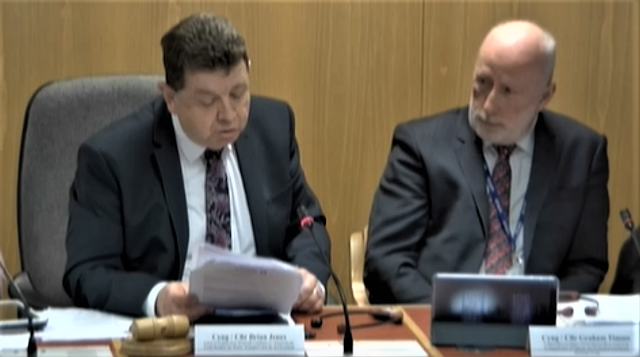 * The start of the webcast of the meeting with Cllr Brian Jones, left, and Cllr Graham Timms.


Over 60 people attended a public meeting held at County Hall, Ruthin on Tuesday evening and 104 people watched online as Denbighshire County Council talked through its plans to become a net carbon zero and ecologically positive Council by 2030.
In July 2019, the council declared a climate and ecological emergency and has called on the Welsh and UK governments to provide assistance and resources to enable the Council to reduce greenhouse gas emissions.
The public meeting was the latest step in the process of engaging and consulting with residents and those interested in environmental issues.
The meeting was also broadcast live on the council’s website.
The meeting discussed two key themes, the first being carbon reduction, the second being around biodiversity and carbon capture.
Issues raised at the meeting varied from trees being built on school grounds to the Local Development Plan, council houses, grass verges, reducing carbon emissions through greater use of public transport,  tackling river pollution, as well as the need for regular engagement with the public on how the council is progressing with its proposals.
The council outlined what it was already doing to respond to climate change, including the introduction of electric vehicles, reduction of carbon in our own buildings, encouraging more staff to work from home, planting trees and encouraging biodiversity through the creation of wildflower meadows.
The environment is a priority in the council’s Corporate Plan which was launched in 2017 and so far more than 9,000 additional trees have been planted while the council has undertaken work to reduce its carbon emissions.
The council now only uses renewable electricity for its own buildings after switching to a renewable only energy provider for its schools, leisure centres, libraries, council offices and depots.
The council has also secured Bee Friendly status from the Welsh Government for its work to protect pollinators and to increase biodiversity in the county while the 35-acre Morfa wetland in Prestatyn has been saved for community use for generations to come after the council secured Welsh Government funding to purchase the site to protect its status as a natural wetland resource.
The council has also agreed proposals to reduce the use of plastics within its offices, following a Notice of Motion last year.
Councillor Brian Jones, the council’s lead member for Waste, Transport and the Environment, said: “We wanted to hear what people thought about our plans as a council to reduce carbon, increase carbon capture and improve biodiversity.
“We reiterated the fact that the environment is one of the key priorities of our Corporate Plan and that the council has achieved a lot over recent years in making our county cleaner, greener and more environmentally friendly.
"It was great to hear some feedback from the audience, but also ideas and initiatives that the Council could possibly take forward over the coming years."
Councillor Tony Thomas, Cabinet Lead Member for Housing and Communities, said: “We were very pleased with the level of engagement.
"Fifty-seven questions were sent in to the council in advance, with plenty of issues and questions being raised by the audience on the evening, as well as some submitted via Twitter and Facebook. It was very clear from the meeting that people are very concerned about the state of environment."
Llangollen councillor Graham Timms, chair of the Climate and Ecological Emergency Working Group, said: “This was a good opportunity for people to have their say and there was plenty of debate and suggestions put forward.
"There were representatives from all corners of Denbighshire and it was clear that there’s plenty of passion around the need to play our part in trying to halt the climate emergency.
"Some of the ideas put forward were already consideration by the council, others were more challenging and would need more detail and serious thinking."
A summary of all the questions raised and the response from the Council is being compiled and will be made available on the Council’s website at a later date.

* See the webcast of the meeting at: https://denbighshire.public-i.tv/core/portal/webcast_interactive/476908
Posted by llanblogger at 11:07 AM