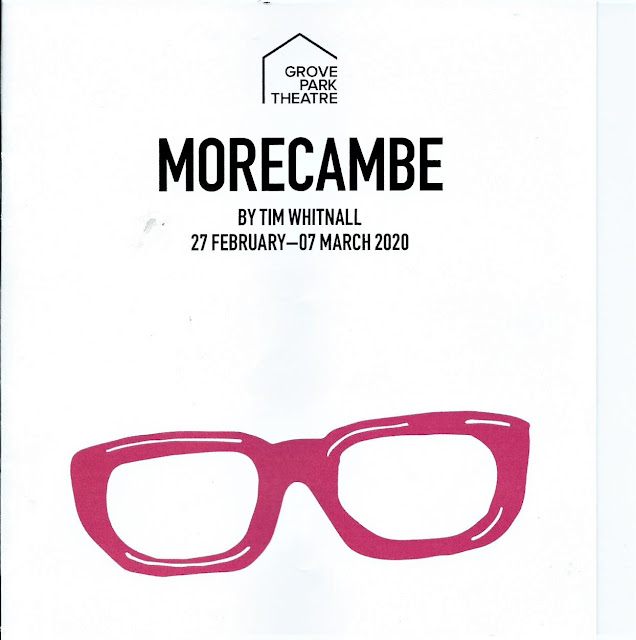 PLAYING a comedy icon and sustaining that performance throughout a pretty testing one-man show can be no easy matter.

But Dan Pedley’s uncannily accurate and masterful portrayal of Eric Morecambe, as the great man himself often said, is achieved without the audience being able to see the join.

He takes on the enormous challenge as Wrexham’s Grove Park Theatre stages Morecambe, a brilliant two-act presentation of the life and times of the comic who became a national treasure, until March 7.

And it’s all there, from the voice, complete with authentic Lancashire accent, to the mannerisms – the peering through the backcloth to deliver a stupidly simple one-liner, the wobbling glasses which indicate that something slighty risqué has been suggested, the catching of the imaginary sweet thrown into the air in a paper bag and the mock lip curling at a Des O’Connor LP.

Pedley also looks eerily like the gangly, bespectacled hero who, along with his partner Ernie Wise, joked their way onto the TV screens and into the hearts of millions during their golden heyday in the seventies and early eighties.

The action takes us right back to the earliest days when, still going by his real surname of Bartholomew, he was pushed by his mum into entertaining at any local venue she could arrange for just a few bob a time.

We follow the lad through his fateful meeting with little Ern – then already an established child star – during the Second World War, the formation of the legendary double act, their domination of the variety circuit and on to TV and film stardom.

Partner Ernie, by the way, is played by a cleverly-styled ventriloquist’s dummy voiced from the wings by another accomplished performer, Huw Sayer, who does all the men who pop up during the course of Eric’s story, deploying an impressive array of accents from London Jewish to Scouse.

The women in the tale, including his formidable mum Sadie, are all voiced from off-stage with equal skill by Sue Williams.

The massive success Eric and Ernie eventually enjoyed wasn’t always an easy journey. And the lows are honestly portrayed.

The duo’s first TV venture, for instance, ended in embarrassing critical failure and we see the long-term impression this made on the deeply sensitive Eric.

We also see the heart trouble which constantly dogged this workaholic and led to his premature death at the age of just 58 in 1984.

This is a brilliant interpretation of Tim Whitnall’s play, deftly directed by Ray Ledsham which certainly brought us sunshine on a cold winter’s night.