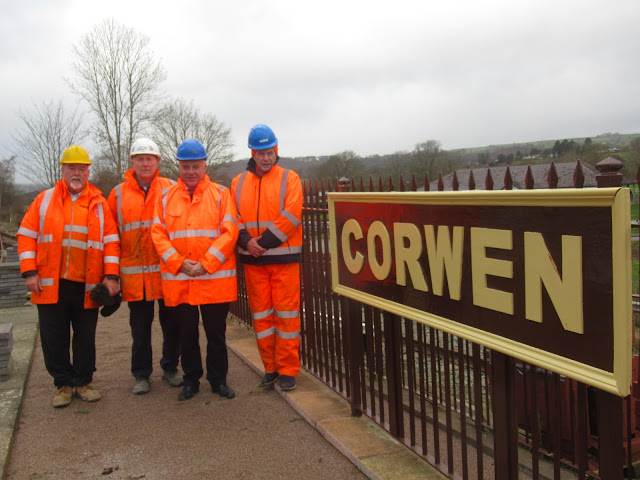 The recently elected Member of Parliament for Clwyd South visited Corwen to see progress towards the completion of the new station project.

Members of the Corwen Central Railway Development team invited Simon Baynes to a meeting last Saturday to be briefed on the project and its likely completion in 2020.

After a review of the Llangollen Railway’s rebuilding since 1975, the effort by the volunteer workforce to build a new terminal station on an abandoned railway embankment over the past five years was explained with regard to the availability of limited resources.

An escorted tour of the station site allowed for the inspection of the completed new trackwork, and the progress with the work on the island platform.

This now includes the installation of four new heritage style lampposts and the columns for the platform end Corwen running-in board.

Work on the excavation of a trench for concrete foundations provided a visual demonstration of the effort required by volunteers to install the final pair of canopy columns.

The completed subway access stairway with disabled chairlift was also inspected and a photo-display in the ticket office building provided a graphic review the many phases of the project since 2015.
Posted by llanblogger at 6:32 AM