Hidden treasure discovered at the Old Lock Up 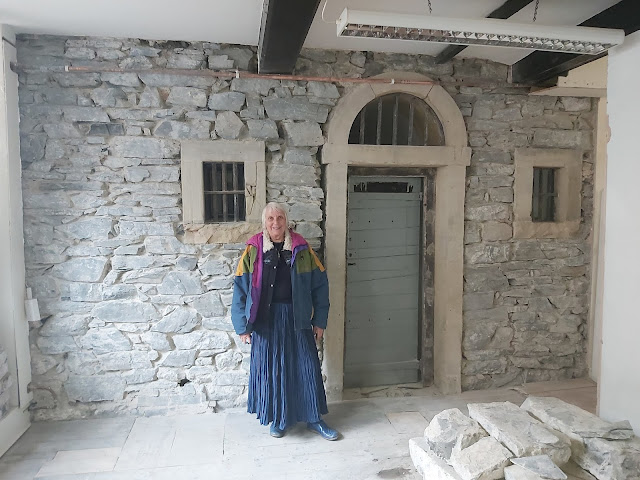 * Sue Hargreaves, chair of the Armoury Conservation Trust, with the original exterior courtyard wall of the Old Lock Up.


The group in charge of revitalising one of Llangollen's most fascinating old buildings were in for shock when they began some building work recently.

Kirsty Jones, a member of the Armoury Conservation Trust which is turning the Old Lock-Up off Regent Street into an historical asset for the community, said: "What started as knocking through a blocked-up doorway has revealed a real treasure.

"What was a plain plaster wall has been stripped away to reveal the original exterior courtyard wall of the Old Lock Up, built in 1834.

"We couldn't believe this beautiful stone wall, sandstone archway and cell window surrounds as well as the original iron bars had all been hidden by modern plaster since long before the property has been looked after by our trust.

"Great thanks must go to Stu Morris Builders and son Brad who have done such stellar work."

When Denbighshire Constabulary was formed in 1840 it became the town's police station, later serving as the town hall and council chamber. Afterwards it became a drill hall and armoury.

Latterly, it was the office for Llangollen International Musical Eisteddfod and the Vale of Llangollen Canal Boat Trust.

Sue Hargreaves, who is now chair of the conservation trust, bought the empty and rundown building in 2012 and embarked on an extensive renovation programme which has seen her introduce displays giving a flavour of its past uses as a lock-up jail and a police station.
Posted by llanblogger at 6:45 AM