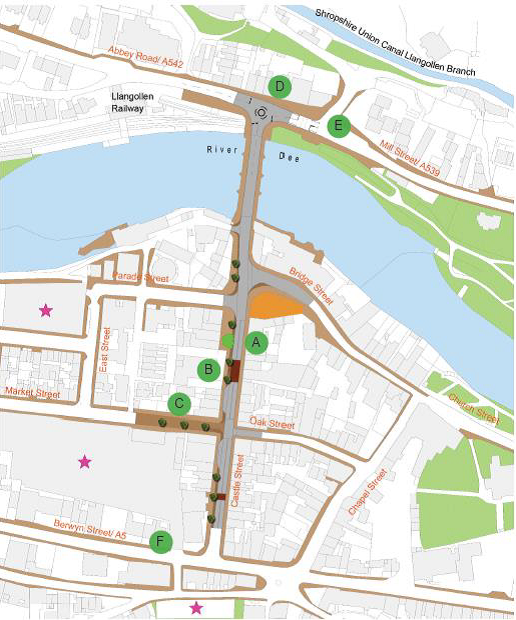 Early indications are that implementing a package of radical changes to traffic and parking in Llangollen town centre will cost between £2m and £2.5m.

That’s the view of local county councillor Graham Timms who chairs the committee which is masterminding the Llangollen 2020 project.
The draft feasibility study, which runs to 79 pages, has been prepared with data crunched by consultants Arcadis and feedback gleaned from public consultation exercises last year.
Cllr Timms recently updated town councillors on the project and has given a further insight to llanblogger.
2020 aims to develop options for a safer and pedestrian-friendly town centre with streamlined traffic flow and come up with options to ease the parking situation.
Main proposals in the report for further consideration are:
+ The closure of Market Street to traffic coming in and out of Castle Street
+ The creation of a mini roundabout at the junction of Castle Street and the A539
+ Short stay parking spaces removed from Castle Street and replaced with goods only loading bays
+ The narrowing of Castle Street
+ Long stay permits no longer able to be used on Market Street car park at certain times
+ No new junction at Market Street/A5/Hall Street
+ Summer park and ride scheme ruled out
+ Ysgol Dinas Bran car park to be used during August by local businesses and staff
+ The Pavilion car park to be used by coaches between dropping off and picking up passengers in town centre
The report says: “There is a significant opportunity to improve the public realm and the environment for pedestrians within Llangollen, through making the town centre and in particular Castle Street more pedestrian friendly and taking steps to reduce the dominance of the vehicular traffic …
“Following the appraisal of options, it is considered that closure of Market Street at the junction with Castle Street is explored in greater detail.

“Market Street would be closed to vehicular traffic entering and exiting onto/from Castle Street. At present the movement of vehicles into and out of Market Street causes conflict, which in turn impacts on the movement of traffic on Castle Street in both directions. This is particularly the case when coaches are entering and exiting Castle Street at the same time.
“A modification to the Market Street/ A5/ Hall Street junction layout has been considered however, as the junction is observed to operate within capacity in both the base year 2018 and the design year 2023 and it is not considered that orthodox roundabouts would be viable due to cross-section constraints, hence no junctions modifications are proposed at this location at this stage.”
On Castle Street the report says: “It is proposed that the existing short stay - 30 minute waiting time with no return within 30 minutes - spaces would be removed with the loss of approximately 13 spaces.”

It adds: “These car parking spaces are in prime location adjacent to the majority of shops and services. However, from our engagement days with members of public during the first round of consultation, these car parking spaces were seen by some to offer an excellent facility whilst others said they had difficulty finding a free space and cars accessing and egressing the spaces had a negative impact on the flow of traffic along Castle Street.

“It is acknowledged that the loss of these spaces has an adverse impact on some users, however a range of complementary measures are proposed to minimise the impact on the local community and business.

“It is proposed that the on-street parking bays would be replaced with Goods Only Loading Bays.
“Goods Only bays would enable only goods vehicles collecting and delivering materials to be able to use the bays, which could then be enforced by DCC’s Enforcement Officers.

“It is proposed that two bays measuring 2.5m wide by 12m long would be implemented in similar locations to the existing parking bays. The purpose of providing the dedicated bays is to minimise the disruption deliveries have on the town centre and improve deliveries/ collections to/from shops and businesses.”

It says: “Denbighshire County Council have confirmed they are happy in principle with narrowing the width of Castle Street to 5.5m. The provision of narrow lanes and a median strip has the potential to reduce vehicle speeds, this would further be enhanced by the implementation of two raised pedestrian crossings.

“A wider crossing point would be provided in front of the Town Hall, as from our on-site observations is considered to be a desire line for pedestrians to cross Castle Street in this location.
Additionally, a second crossing point on Castle Street is proposed part way between the Market Street and the A5.”

It adds: “A mini-roundabout is proposed at the A539/ Castle Street/ A542 junction. This has the potential to improve the junction capacity, reduce vehicle delay and queuing. It is envisaged that this would be a paved mini-roundabout, designed and delivered to be in keeping with public realm improvements delivered across the town centre.”

Later, the report says: “As the on-street short-stay car parking spaces along Castle Street are proposed to be removed, several existing on-street parking spaces on Oak Street and Bridge Street are proposed to be designated disabled parking bays, in order to ensure there is availability of parking for those that need it within close proximity of Castle Street.”

The report goes on: “The option to develop a park and ride scheme during the summer months has been considered as part of this study, however at this stage it is considered that such an option would not be financially viable, but this does not mean that at another point in the future this option should not be considered again.”

Arcadis consulted Ysgol Dinas Bran on the possibility of using its car park during the month of August, and the report says: “In principle the school is content for the school car park to be used during the month the school is closed (August). It is proposed that this car park could provide additional spaces for local business and their staff to use, thus freeing up the council operated and maintained car parks within the town centre for visitors.”

On the Market Street car park, the report proposes its redesignation as short-stay.

It says: “This would enable a higher turnover of car parking spaces through the removal of vehicles that are parked for long periods of time, thus enabling a greater number of vehicles to use and benefit from the centrally based car park.

“This would however mean that the use of the long stay permits would no longer be able to be used in this car park and thus workers who wish to use this car park, would have to park in the other long stay car parks in the town.

“It is recommended that detailed discussions are had with DCC officers to consider whether it would be possible for the designation of Market Street to be seasonal, i.e. it is considered a long stay car park during the winter months when visitors numbers are lower and demand for spaces is lower and a short stay car park in the summer months when there is greater demand for car parking spaces.

“As the short stay car parking spaces are proposed to be removed from Castle Street, further consideration could be given to provide users of the Market Street car park with 30 minutes free parking, as not to discourage those shoppers who would have otherwise used the spaces on Castle Street from visiting the town.”

The Arcadis study also proposes that the number of coach spaces at the Market Street car park is reduced, in order to provide about 30 more spaces for both tourists and local people.

Another suggestion is that the Pavilion car park could be used for coaches to wait between dropping and picking up passengers at the Market Street car park.
The report says: “It is acknowledged that this would increase the number of coach movements within the town centre, as coaches have to travel to and from the Pavilion.  However, it is hoped the provision of extra car parking spaces in the Market Street car park and the other measures proposed to increase the turnover of spaces would reduce the number of cars searching for spaces within the town centre.”
Cllr Timms said: “Now the final report has been published the 2020 committee is exploring options for funding. These include the Welsh Government, Visit Wales, the Heritage Lottery Fund, the Area of Outstanding Natural Beauty (ANOB) and Denbighshire County Council.
“Early indications are that the implementation of proposals in the report will cost between £2m and £2.5m.”
Cllr Timms estimates the plan could be implemented by the end of 2020 or during 2021.
He added: “I am confident it is going to happen. That’s because we’ve got a really good case which fits in with what the county council is planning to do across Denbighshire.
“More work now needs to be done on the parking aspect of 2020.”
·         To see the full report, go to: . https://cadwynclwyd.co.uk/wp-content/uploads/1.-Llangollen-2020-Project-Feasibility-Study-Report_FINAL-with-appendices.pdf There is a hard copy in Llangollen Library.