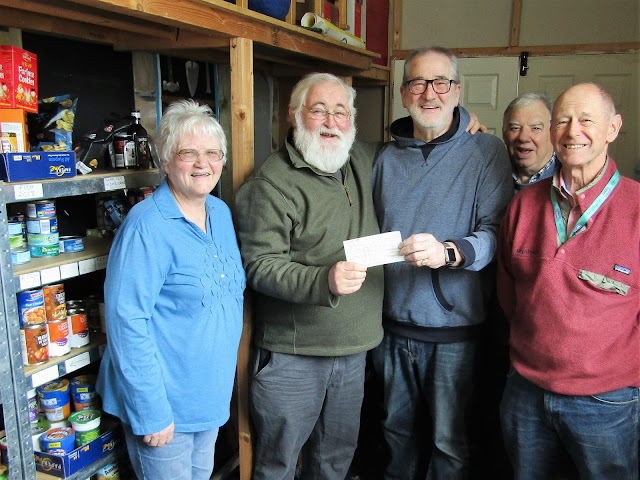 * Austin Cheminais, left, hands over the £250 cheque to Pastor Brian Smith in the food bank storeroom. Flanking them are Pat Smith and Christmas Festival Committee members Ian Parry and John Palmer.
Members of the committee which organises the annual Llangollen Christmas Festival went along to Matt’s Food Bank in the town to hand over a cheque for £250.
The money was part of the proceeds from last year’s festival the remainder of which - £1,000 – was recently donated to the Welsh Air Ambulance Service.
The food bank has been operating in Llangollen for the past eight years and currently distributes basic supplies to around 400 people a year.
Vouchers for the bank are available from a variety of places in the town, such as the One Stop Shop in Llangollen Library, the Citizens' Advice Bureau, the health centre and all three schools.
Donations of food are always welcome at drop-off points including the Co-op in Regent Street and a typical shopping list includes everything from breakfast cereal and biscuits to tinned meat and fish to sugar and dried pasta and rice.
Handing over the cheque to Pastor Brian Smith and his wife Pam, who run the food bank, Christmas Festival chair and town councillor Austin Cheminais said: “We’re delighted to be able to support this very worthwhile local cause which does so much good in the community.
“When it came to deciding which local charity to help with proceeds from the festival the food bank was the overwhelming choice of the committee.”
Pat Smith said: “We’re very grateful to the committee for this very generous donation.
“Their support also helps to give us a higher profile in the area.
“Once people have their vouchers for the food bank they can either come along to collect their supplies or we can arrange to have them delivered to a local pick-up point if that’s better for them.”
Posted by llanblogger at 6:45 AM