Brewery and builders to sponsor Llanfest 2019


Two Wrexham businesses will sponsor this year’s Llanfest which will wind up this year's Llangollen International Musical Eisteddfod on Sunday July 7.

Wrexham-based housing developer SG Estates and Wrexham Lager have been named joint backers of the event which will this year star The Fratellis, The Coral, The Pigeon Detectives and nineties power pop rock trio Dodgy.

It is the first year SG Estates has sponsored the festival and the company says it is committed to preserving its Welsh heritage and supporting the eisteddfod.

Managing director Steve Griffin said: “It is at the heart of our local community in Llangollen. As a company dedicated to sustaining and developing the area, we are keen to support this local event and we see this year’s sponsorship as the start of a long-term partnership.”


Wrexham Lager’s involvement in the event goes back over 70 years, shown by the fact that festival organisers have found an advert for the brewery in the first official International Eisteddfod programme from 1947 (pictured below). 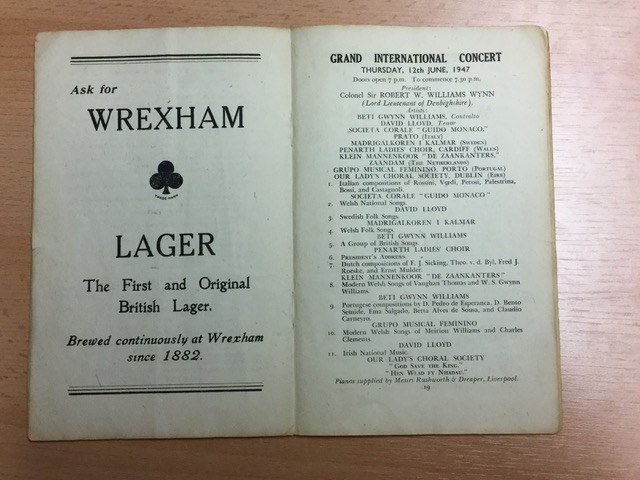 Mark Roberts from Wrexham Lager said: “The festival is without doubt one of the highlights of our calendar and we are proud to be one of its longest standing sponsors.
“We have been supporting the ethos of the festival from its inception all those years ago, bringing diverse communities together to enjoy and celebrate as one.”


Llanfest was launched in 2011 as the eisteddfod’s finale party to introduce the event to new, younger audiences and attract festival-goers from across the country.

The announcement of The Fratellis and The Coral’s appearance follows the success of Indie pop legends Kaiser Chiefs in 2018 and legendary Welsh band Manic Street Preachers in 2017.


Tickets start at just £39 and go on general sale today (February 1).
Organisers have introduced a new layout for 2019, freeing up extra space in the Pavilion, with additional premium standing available at the front of the stage.

This will see capacity increase to more than 5,200. As well as this, a tiered seating area will also be available in the middle of the arena.

There will be live performances from a range of local artists from 2pm on the outside stages and the support acts Dodgy and The Pigeon Detectives will run from 6.15pm in the Pavilion, before The Fratellis and The Coral take to the stage.