A teenager recently chosen as her area’s first ever Welsh Youth Parliament Member has been backed by her local AM Ken Skates.

Talulah Thomas, 17, (pictured) will represent Clwyd South after being elected as one of the 60 inaugural members of the newly formed national body in November. 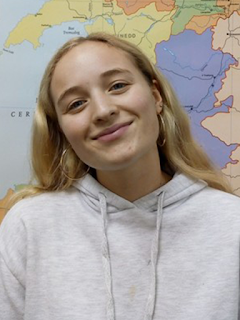 The Welsh Youth Parliament aims to empower young people to identify, raise awareness of and debate the important issues to them, and will work directly with the National Assembly to make young people’s voices heard by those with the power to make change.

“The political future of Wales rests with our youth, and our nation's young people must be engaged to ensure progression,” said Talulah, who lives in Llangollen and attends Ysgol Morgan Llwyd in Wrexham.

“I would encourage discussions within schools by starting an all-inclusive committee that will highlight the issues that are important to young voters, as their views are most important to me. I hope that this will reflect politics as an essential element of everyday life and create a bridge between the voices of young people and the Senedd.”


Talulah added: “I’m studying through the medium of Welsh, therefore will also be focusing on the importance of keeping the Welsh language going amongst the youth of Clwyd South.”


Assembly Member Ken Skates contacted Talulah after her election and the pair met last week to discuss their shared priorities for the area, which include increasing youth participation in politics and improving mental health education in schools.


Mr Skates said: “Mental health is a subject close to my heart, and I’m pleased to hear it’s high up on Talulah’s agenda. Good mental health so important, particularly for our young people, which is why I was delighted this week to see the Welsh Government commit an additional £7.1m to help protect, improve and support the mental health of young people in Wales.”


The Welsh Labour AM added: “Having met Talulah I’m confident she’ll do a fabulous job. I’m looking forward to working with her and helping her however I can.”
Posted by llanblogger at 6:45 AM