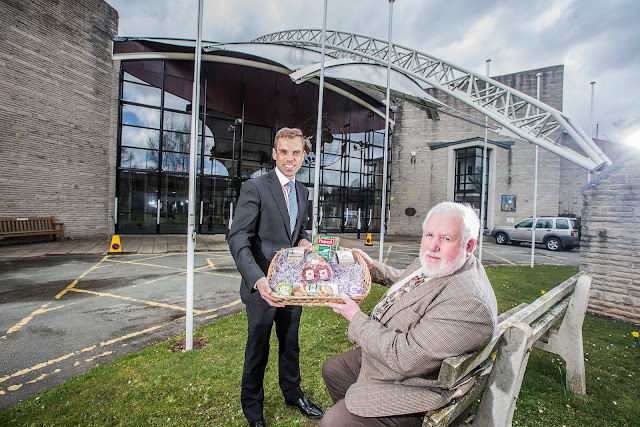 * Colin Loughlin with Clwyd South AM Ken Skates, who is also the Welsh Government Minister for the Economy and Transport.

Tributes have been paid to a “larger than life” former wine merchant who saved Llangollen Food Festival.

Friends and colleagues were devastated by the death of Colin Loughlin, 76, at his home on the outskirts of the town following a suspected heart attack last week.

When the previous organiser of the food festival pulled the plug in 2011, Colin came to the rescue and led the committee of volunteers who took it over.

Since then the event has gone from strength to strength and has been named as one of the top 10 food festivals in the UK.

His contribution as the chair of the festival committee has been celebrated with a painting of him in a mural on the side of the Llangollen pavilion where the event is held every October.

A native of Wrexham, Colin ran a wine distribution company called Whitehouse Wines in Coedpoeth before going into business with Lorraine Hughes.

Lorraine continued to run the business after Colin retired five years ago before stepping down as festival committee chair in 2016.

She said: “I’ve known Colin for many years. He was so full of energy and character

“We became business partners when we took over Megan’s Kitchen about 14 years ago.

“In 2011 the guy that was running the food festival had to stop and we were approached to form a committee and to try and keep it going. Colin was elected as chair and he put his heart and soul into the job.”

Lorraine, who is the food festival’s assistant secretary, added: “He was larger than life and loved telling stories and listening to stories.

“He was the force behind the Llangollen Food Festival and we were all grateful when he returned and started attending committee meetings again a couple of years ago after resigning the chair in 2016.

“The issue was he put so much into the job he was wearing himself out. He was divorced and didn’t have any children but so many friends.

“He was also a keen rugby man and a massive Wales fan. At least he died knowing Wales were very much in with a chance of winning the Six Nations. He will be sorely missed and personally I am devastated.”

Festival committee secretary Ian Parry said: “I got to know Colin as he would call and see me from about 2002 when I was town clerk. He would pop into the office to see me about various issues.

“Then in 2011 he approached me for help in putting together a committee to save the Llangollen Food Festival and he asked if I would act as secretary to the committee and I was happy to do so. Initially the festival was run by a different group and then a commercial contractor.

“But in 2011 it looked like it would close down and Colin wanted to save it. He did a tremendous job getting a committee together and saving the festival. The success of the festival is down to his work and guidance.”

He added: “The problem was as the festival grew and expanded so rapidly he took on a huge amount of work and the pressure became immense. He decided, probably quite rightly for his own health, to stand down as chair in 2016.

“We brought in an outside company to work with the committee and help with marketing and organising the event. Colin stayed away from committee meetings for a year but came back and sat in offering his help and experience. He was really welcome.

“We simply wouldn’t have a food festival without Colin. He put so much into it and he will be sadly missed by many people in the town. He was always popular, measured and polite and was always an absolute gentleman. It’s such a huge loss for the town.”

Ian says Colin was a keen member of the Round Table in his younger days and on reaching 40 he joined the 41 Club, a group that works within the Round Table.

He said: “He was a keen rugby player in his younger days and played either hooker or front row for Wrexham Rugby Club and he used to love driving his Triumph Vitesse which was his pride and joy.”

Pip Gale,  of Gales Wine Bar and Hotel, added:  “Colin was so well respected and an amazing member of the food festival committee. In fact without him the festival just wouldn’t be alive now. He put in lots of effort but also added lots of real joy.

“He invited me onto the committee and it remains one of the best things I’ve ever done. He was a real driving force behind the undoubted success of the festival.

“He was uplifting in his grumpiness as he walked around the festival cajoling stall holders into making their exhibits bigger, better and brighter. If he had a fault it’s that he took too much on, he just loved it too much.”

He added: “We are already thinking of how we can, as a committee honour his memory. We are thinking of maybe having a best display award in his name with the winner being presented with the Colin Loughlin Trophy.

“However, it’s very early days but we will, I’m certain, be doing something. He deserves to be remembered with affection for all the hard work and effort he put into the festival.”
Posted by llanblogger at 1:03 PM