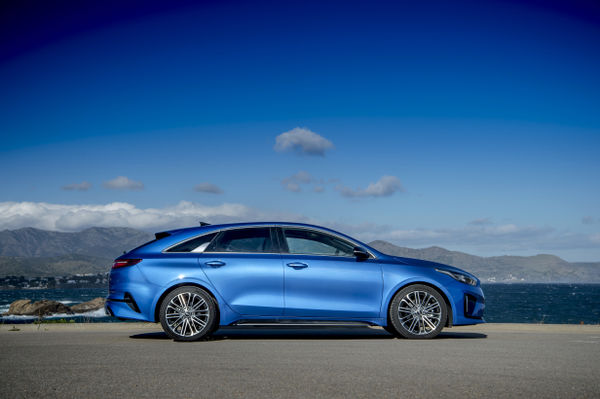 * The new Kia ProCeed - from the side and (below) rear. 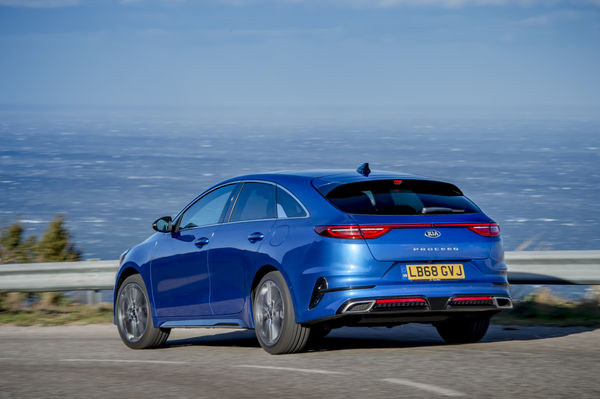 KIA has opened its 2019 campaign with a real bobby dazzler.


Meet the new ProCeed, the range topper that has taken Ceed in a whole new direction with a bold shooting brake design.


Until now ProCeed - yes it still has the silly name - has been a three-door hatch. That market is virtually dead but rather than scrap the hatch it has been reinvented and the result is stunning.


This is essentially an estate car, a rival even to the Ceed Sportwagon, but it is lower and longer than its sibling with a swooping coupe style roof and steeply raked tailgate.

No-one in the sector which is bossed by Ford Focus, Vauxhall Astra and VW Golf has anything like it so watching how Proceed develops is going to be interesting.


Only the bonnet and front wings have been carried over from Ceed while improved dynamics have spiced up the handling which becomes evident when driving the GT model with its 201bhp 1.6 litre petrol engine, but more on that later.


There are three trim levels GT Line, GT Line S and GT powered either by a 1.4 litre turbo charged petrol or a 1.6 diesel for all but the GT which gets the 1.6 litre petrol.


Inside it's standard Ceed fair with the range topping 8-inch touchscreen controlling the majority of the functions although Kia prefers switches for the radio and heating controls which are ranged clearly across the central console which is just the way I like it.


Although Proceed has a definite sporting edge it is no flaming hot hatch so there is a good compromise between ride comfort and out and out handling.

Make no mistake the car will fly around bends faster than will ever be needed on public roads but at the same time bumps are well cushioned so this is very much a car the family can enjoy.


Cabin space is good and a six footer sat comfortably behind my driver's seat, and in spite of the dipping roofline the 594 litres of boot space is not far behind the 625 litres for the Sportwagon.


Kias have always been generously equipped and that is the case here. Even the 6-speed manual GT Line which opens the range at £23,835 has navigation, heated front seats, heated steering wheel, auto dipping headlights, electronic parking brake and that is just a snapshot. Add an S and there is even more with heated outer rear seats, power adjustment and memory setting for the driver's seat and a powered tailgate.


If the bank balance allows it is worth splashing out £1,100 for the seven speed automatic which is smooth and slick and can be used as a manual either via the gear lever or steering wheel paddles.


Safety features have become the norm and there is no shortage here with crash avoidance braking that includes pedestrians, steering the car within the lane, blind spot collision warning ... I could go on.


In spite of the lack of interest in diesel power Kia is offering the 1.6 litre with its fairly modest 134bhp.

The ProCeed deserves more and you will get it from the more punchy 138bhp 1.4 turbo charged petrol which is nearly a second quicker to sixty (9.1secs) but you will lose out heavily on economy - 42.8mpg versus 56.5mpg for the diesel.


Which brings us to the jewel in the ProCeed crown, the 1.6 T-GDi. For me this is the engine for this car. There is a spiky rawness to it, growling under acceleration and eager to respond at low revs. It is the only model where the performance matches the car's matcho looks. A sprint to sixty takes 7.2 seconds, not as quick as the hottest Golf or Focus.


The folk at Kia say, they are unlikely to go for anything bigger on the engine front so they will not be asking parent company Hyundai for the dazzling 2-litre powering the i30N let alone the i30N Performance.


At least the 1.6 T-GDi has given an added buzz to the Ceed hatch which has identical performance to ProCeed GT and handling to match the hike in power. The new Ceed GT model has hit the showrooms and costs £25,535.


My guess is all eyes will be on its pretty new sister. Aside from Stinger this is the best looking Kia ever. It has a feel good factor and looks the business particularly in profile or from the back. I don't see how it can fail.