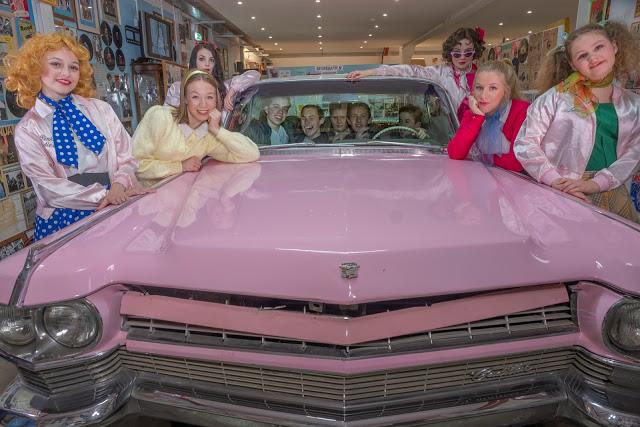 * The cast of Grease by the Young 'Uns.

Grease is the word for the Young ‘Uns at Llangollen Town Hall until tomorrow night.


But their packed audiences have come up with another word for the performance of the smash-hit musical about teen life in the States over 50 years ago – fabulous!
An enormous cast from the Operatic Society’s junior section act, sing and dance their way through the evergreen piece in fantastic style and are drawing in maximum crowds for their efforts.
Grease is a snapshot of life for seniors at Rydell High at a time when new girl Sandy joins their ranks and of her blossoming love affair with the young buck she’s met on the recently-ended vacation who turns out to be leader of the school’s resident pack of hard-nosed greasers, the T-Birds.
She teams up with their equivalent female gang, the Pink Ladies, and it’s fun all the way from here.
We all know the story from the famous late 70s film but this crowd of performers are much nearer in age to their characters than those who portrayed them in the flick.
Sophie Roberts can belt out the songs and hand-jive with the best of them as Sandy and her professionalism in every department is matched by Ethan Le-Cheminant who shines as her well-quiffed beau Danny.
Celyn Orton-Jones punches above her weight as the overly-mature girls’ gang leader Rizzo and Connie Richardson shines as her pink-haired pack mate Frenchy.
There’s a nice comedy turn from Young ‘Uns favourite Aled Morris as Roger, the clown of the T-Birds, and Megan Edwards really does come up with a Strictly-standard performance as Cha-Cha, the best dancer at rival school St Bernadette’s in the prom scene.
On his farewell appearance with Young ‘Uns before moving on to study for a professional stage career is Cassius Hackforth. He hands down a nifty cameo portrayal of Frenchy’s Guardian Angel and unleashes the strong voice and presence that has been pleasing the drama group’s audiences for the past eight years.
But Young ‘Uns fans needn’t worry because another of their stars, Shea Ferron, is still available for future shows. In Grease he’s as accomplished as ever, this time as Vince Fontaine the oily teen radio DJ.
The show moves along at a cracking pace keeping up the momentum with stand-out numbers such as Greased Lightning, Beauty School Dropout and, of course, You’re the One that I Want in which Sandy and Danny finally team up. A live band helps tremendously with all this.
Backing the leads is a huge and talented cast who take the stage as high school students, cheerleaders and wannabe Pink Ladies and T-Birds.
As usual an equally vast behind-the-scenes crew - spearheaded by producer Pamela Williams, artistic directors Jo Lloyd and Robin Crowley and musical director Julian Cattley - has made a superb job of staging, costumes, including some great wigs, and settings.
The Young ‘Uns’ Grease, which hits the stage again tonight (Friday) and again twice tomorrow including an afternoon matinee, really is a class act.
Posted by llanblogger at 8:04 AM