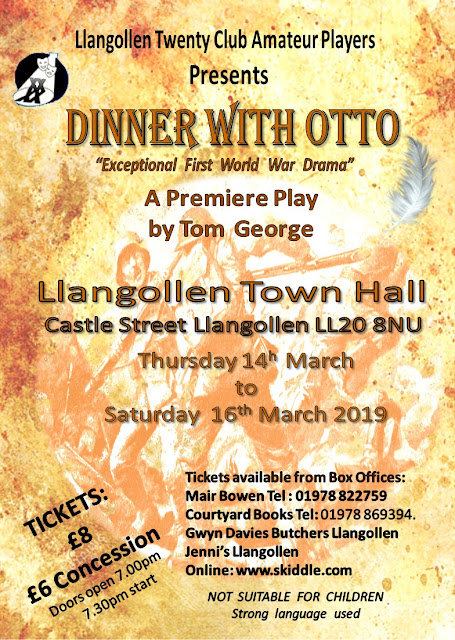 Llangollen Twenty Club Amateur Players are well into rehearsal for a world premiere play, Dinner with Otto, written by Tom George and directed by Lyn Aston.

After it's initial showing at Llangollen Town Hall,  the play will be going on professional tour.


Dinner with Otto is set in March 1919 after the conclusion of the bloodiest conflict in history.

It tells the story of a young soldier Ben,  returning  home to his mother and friends after witnessing the atrocities of war, and now having to live with a deep sense guilt, and hopelessness for his future.

Otto Schultz, whom he killed during the fierce battle, died slowly, on the end of Ben’s bayonet and during the time that Otto was dying the two young men realised that in other circumstances they could have been friends.

Otto asked Ben to write to his mother and told him that he will keep a seat for him at the dinner table in Hell, as that is surely where they will both end up.

Ben had promised to protect his friend, Aled, but Aled was killed, further adding to Ben’s sense of guilt.

His mother realises that he has many other secrets that will affect the future course of his life.
The play has a very dramatic, and to some, surprising end, but, according to director Lyn Aston, is sure to keep the audience on the edge of their seat, "willing this sad and haunted young man to survive and deal with the trauma that impact of any war has on the returning soldier. A must see piece of exceptional writing, brought  to life by a very talented cast."
* Tickets are available from: