Work on new locomotive steaming ahead 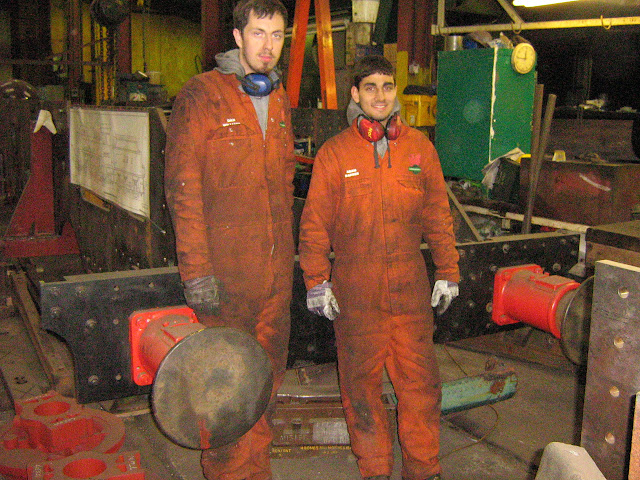 * Daniel Williams, left, from Wrexham, and Jon Zuloaga from Spain have been working on The Unknown Warrior.
SPECIALIST engineers at Llangollen Railway are steaming ahead on an ambitious £1.5 million project to build an entirely new locomotive to mark the centenary of the end of World War One in six years time.


And early next month railway buffs can see for themselves how the steam engine, to be known as The Unknown Warrior to commemorate those who died in the 1914-18 conflict, is taking shape in the railway’s own workshops.


The LMS-Patriot Project  was launched by heritage railway enthusiast David Bradshaw with the aim of building a new Patriot class loco, the originals of which ran in the 1920s and 30s.


This will tour heritage railways across the country and will also be capable of running on the mainline rail network.
Target date to have it rolling is the 100th anniversary of the Armistice on November 11,  2018.


Cash for the project is coming from pubic donations, legacies , commercial sponsorship and grant applications.
It has received the endorsement of the Royal British Legion, and the engine will carry a Legion crest above its nameplate.
Many original LMS drawings have been obtained for the project and, where necessary,  draughtsmen are preparing new drawings using computer techniques which produce them in 3D.
Assembly of the The Unknown Warrior began in 2009 led by Dave Owen, chief mechanical engineer of Llangollen Railway Works.
Other workshops around the UK are making components for the new loco, including the Boro Foundry at Stourbridge, the South Devon Railway, LNWR Heritage and Tyseley Locomotive Works.
To mark Remembrance Day, visitors will be given guided tours of the project on Saturday and Sunday, November 3 and 4.
They will see that the massive steel frames – or chassis - of The Unknown warrior have now been laid using heavy gauge steel plate and enormous castings at a cost of £48,000.
Dave Owen, the man in charge of the project, explained that the next stages are to install the steam parallel boiler.
Roughly the length of a single-decker bus and three times as heavy, this will cost £500,000.
Fundraising for it began in May this year  with the national launch of an appeal at Crewe.
LNWR Heritage in Crewe, the company founded by pop mogul and steam enthusiast Pete Waterman, will be building the boiler.
Next after the boiler will come the fitting of the loco’s six 6ft high wheels iron wheels, which are now being cast at the Boro Foundry at a total cost of £60,000.
The “tyres” which encase the wheels and the axles on which they will turn are both being sourced from specialists in South Africa.
While some of the components for the engine are new, others are being reclaimed from scrap or bought from private railway collections.
The chimney which will sit proudly on top of the finished loco is actually from an original Patriot class engine and currently sits on the workshop floor ready to be lifted into place.
While Llangollen Railway runs almost entirely on volunteer power, the workshop has about a dozen paid and highly specialised staff, many of whom are working on the Patriot project, which will bring in much-needed revenue for the heritage operation.
If building The Unknown Warrior has an international feel because of where its components are coming from, so has the workforce.
Because among those involved on Patriot is 21-year-old Jon Zuloava from Bilbao in northern Spain who is currently on a spell of work experience in Llangollen.
He said: “I have been here since April and have enjoyed working on the project very much as it is so interesting.”
To keep the project steaming along, regular cash contributions are needed.
As Dave Owen said: “This is a very expensive thing to build and the people behind it have come up with a scheme in which various parts can be sponsored
“That can be anything from a simple nut at £2 right up to a complex driving wheel casing for £9,000.”
He added: “I’d say this has been a complex project to work in within the range of basic engineering but everyone is finding it very interesting.”
Llangollen Railway spokesman George Jones said: “It means great cudos for us that our workshop is putting this unique steam locomotive together.”
On November 3 and 4 the Poppy Train will run out of Llangollen Station proudly wearing its own poppy.


The service will depart at 11am, 1pm and 3pm on both days for a period of quiet reflection.


There will be free entry to the workshops to see the Patriot project at specific times on both days with a valid train ticket.