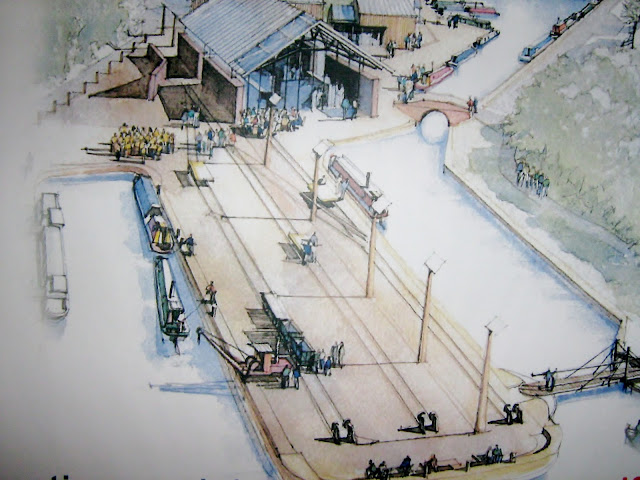 * An artist’s impression of how the finished scheme would look.


ORGANISERS of an exhibition showcasing a £100,000 scheme to enhance the visitor experience around Trevor Basin say it was given a warm reception in Llangollen last Friday.


Pontcysyllte Aqueduct and Canal World Heritage Steering Group are currently carrying out a public consultation exercise into its ambitious scheme to develop a new visitor centre at the canal basin to encourage visitors to explore further into the surrounding World Heritage Site.


It says it is envisaged that a visitor centre would become the “central anchor” for the site, which over the summer hit the international headlines when the Olympic torch passed over the aqueduct aboard a narrow boat.


It says a number of sites have been considered and one has now been identified as being the most able to provide the visitor “offer” envisaged.


The group is also looking into the feasibility of re-opening part or all of the Plas Kynaston Canal from Trevor, possibly as far as Cefn Mawr.


However, the group stresses all the proposals are long term and depend on the development of the former Flexsys site nearby.


The exhibition which came to Llangollen Library last Friday aimed to gauge public opinion on the scheme and has already toured other venues in the 11-mile World Heritage Site Corridor, including Chirk and Cefn Mawr.


Panels containing a wide range of information on the scheme, including plans and artist’s impressions, were set up in the library foyer and copies of documents and a CD explaining the whole project were available to pick up.


Interested members of the public were able to write their comments on post-it notes which could be stuck on a map of the World Heritage Site, or fill in questionnaires which can be handed in at Tourist Information Centres in Llangollen or Wrexham before the consultation closing date of November 16.


A spokesman for the group said: “We had tremendous support for the exhibition from the people visiting Llangollen Library and there were some very positive comments.”


A separate consultation event is planned for the local community of Chirk Bank and Western Rhyn on Monday, November 12.