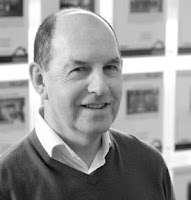 Mike Edwards, chair of Keep Llangollen Special (pictured right), sat in as an impartial observer at Monday’s meeting of the Welsh Assembly’s public accounts committee held at Llangollen Pavilion.
The committee heard evidence from some of those involved about the acquisition and subsequent attempts to dispose of the former River Lodge in Llangollen.
Mike has written this report for llanblogger:
“I attended the committee meeting in Llangollen on Monday afternoon which was extremely well attended my members of the public and additional chairs had to be put out to accommodate all interested parties.


The first witness was Mr Pol Wong, who is chair and chief executive of Powys Fadog the not for profit community organisation who had intended to use the River Lodge (former Woodlands Hotel) as a local facility to run martial arts and other courses which Mr Wong  said were beneficial to peoples's health and welfare.


Mr Wong outlined to the committee a lengthy saga of his organisation endeavouring to lease the property and stated that initially the organisation had received a great deal of support from the Welsh Government and had reached an advanced stage of agreeing terms and conditions for Powys Fadog to acquire the a lease of the premises.


He also mentioned that there had been negotiations with Clwyd Alyn Housing Association for them to develop part of the site for social housing.


Mr Wong said he was initially very happy with discussions and assistance he had received from officials from Welsh Government, but became frustrated at the length of time each step in the process had taken.


Powys Fadog had drawn up a business lan for the project and costed the planned refurbishment works to the property, but these costs kept increasing as the delay on finalising the acquisition of the building by Welsh Government and agreeing the lease dragged on.


Suddenly the Welsh Government withdrew from the project, but did not formally advise him why and then failed to communicate with Powys Fadog.


He said he was not advised of apparent legal problems which had arisen and he had actually been living in part of the premises as a caretaker to prevent vandalism, but was then locked out and made homeless.


Mr Wong was also questioned about the appointment of Amanda Brewer, a Welsh Government official, as a director and company secretary to Powys Fadog.


He said that he had been advised that Amanda was authorised to take up this role and that she was very experienced in dealing with community projects and able to bring skills to the organisation which they did not have.


She outlined to the committee the history of the project as far as her involvement was concerned, which included initial discussions with Powys Fadog and the acquisition of the property by Welsh Government from a third party.


She pointed out that there had been some confusion when the WDA was absorbed into Welsh Government Departmental structure and felt that staff were not briefed fully about changes in policies and procedures adopted by WG.


She said that it was quite common for the Land Division to undertake entrepreneurial acquisitions which had a risk factor attached to them.


Amanda Brewer then gave evidence in relation to a possible conflict of interest that she had by joining the board of Powys Fadog and stated that this had been authorised by her line-manager and his superior.


She also said that it was common for Welsh Government staff to be encouraged to donate their skills and experience to community organisations and that following her appointment as a director and company secretary of Powys Fadog she had withdrawn from negotiating the terms of the transaction, which were passed over to a colleague.


She said that it was department policy to allow staff to use their work e-mail address for a "handful" of private non-Welsh Government correspondence.


Amanda was asked by one of the committee members if she felt that she had been made a scapegoat and she agreed with this and said that she could go further by saying that taking action against her was the only way the project with Powys Fadog could be cancelled by Welsh Government.


She had been subjected to disciplinary action which had resulted with her been dismissed from her post.


The final witness of the day was Mr Gareth Hall, former director of economy and transport at Welsh Government who was head of the department in which Amanda Brewer was employed.


Mr Hall denied that staff had not been properly briefed about changes in policy and procedures when the WDA was absorbed into Welsh Government.


He also claimed that he had been advised categorically by senior members of his staff that Amanda Brewer did not have a "conflict of interest" and said since he managed such large department he accepted the assurances he had been given.


He said that later when he became aware of issues with this transaction it became clear to him that Amanda Brewer did have a conflict of interest and he initiated disciplinary procedure which resulted in her being dismissed.”