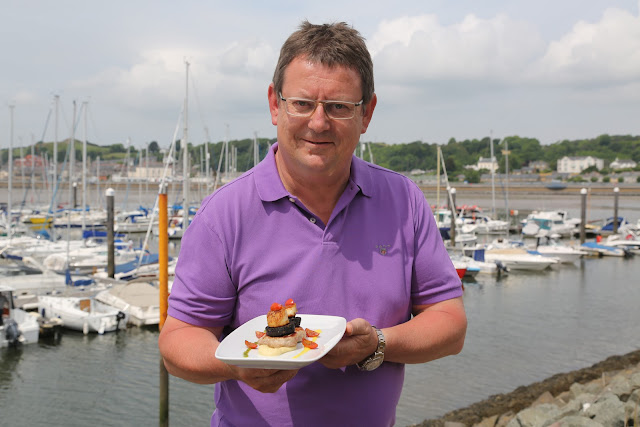 Wales’ top television chef Dudley Newbery (pictured above) will be a man on a mission when he stars at a leading food festival in Llangollen.
Dudley will be making an impassioned plea to people to buy and enjoy locally produced food.
His good food crusade brings him to Hamper Llangollen 2012 on Saturday and Sunday, October 20 and 21.
Also starring at the popular food festival will be two other celebrity chefs, Graham Tinsley, from ITV's Taste the Nation and a former captain of the Welsh Culinary Team, along with the ever popular Dai Chef, who is returning to the event after an absence of several years.
This year's festival is being supported by the rural development agency, Cadwyn Clwyd, whose contribution came via the Rural Development Fund for Wales 2007-2013, which is funded by the European Agricultural Fund for Rural Development (EAFRD) and the Welsh Government.
According to Dudley, the festival was the ideal showcase for locally produced food.
He said: “I want to encourage people to shop locally and to be creative with the ingredients. A lot of people cook the same things every week, whether its rice or pasta. But it doesn’t have to be like that."
Dudley’s love of good food goes back a long way.
“I was just one of these kids that was hungry all the time so I started cooking for myself,” he confessed.
But he didn’t just rustle just any old beans on toast type meal as a youngster.
The chef, who will be demonstrating at this year’s Llangollen food festival, was a dab hand at chicken in a sherry sauce at the age of 12.
“Sometimes I would cook for my family, but normally I was starving so I’d cook my own supper,” says Dudley who grew up at Ynysybwl, near Pontypridd.
He was fortunate, he says to have been taught cookery at school.
“That helped a lot as well,” he says. “I don’t know what minister it took to realise that it’s important that children learn to cook because it’s been an obvious thing over the years. It’s an essential life skill.”
He takes a swipe at the recent fashion for teaching food technology in schools instead of cookery.
“You can learn food technology later on, you need to learn the basics first – hands on. Kids need to know why things work.
“I love working in schools. Kids love it, they love to taste things.”
When it comes to personal choice of food Dudley likes nothing better than a good old traditional roast.
His Last Supper would be“a nice roast rib of beef, potatoes cooked in beef dripping, proper beef gravy and Yorkshire pudding…”
“I like to eat exotic food, I like to eat food that’s been well prepared with a lot of skill. But that’s a special occasion.
“At the end of the day everybody likes to eat good tasty home-cooked food. The influence is changing in restaurants now. They’re getting their acts together and serving food that people don’t cook at home any more.
“It’s unbelievable, really. Years ago everybody knew what a shepherds’ pie was because they had it once a week made with leftovers from the Sunday roast. But now they have no idea."
Robert Price, Cadwyn Clwyd's agri-food project officer, is thrilled that Dudley will be sharing his knowledge and enthusiasm at this year’s festival.
He said: “I’m a big fan of Dudley because not only is he an exceptionally gifted chef he is an eloquent champion of fine food.
“Thanks to a whole host of indigenous companies, North East Wales is rapidly establishing a reputation as a centre of excellence for high quality cuisine.
“The food festival is a perfect shop window for the companies who form the backbone of our rural economy.
"The location of the Pavilion is absolutely spectacular - I can't imagine that any other food festival in the UK has a more beautiful setting."
For more information about Hamper Llangollen 2012 visit www.llangollenfoodfestival.com
Posted by llanblogger at 8:41 AM