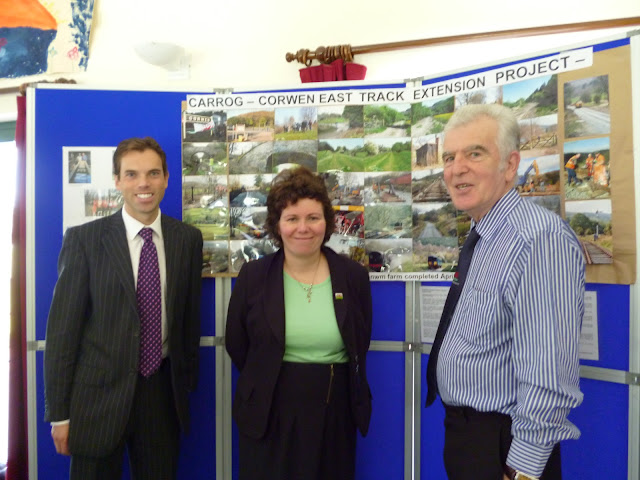 * Ken Skates AM, Susan Elan Jones MP and Jim Ritchie,
chair of Llangollen Railway Company.
Clwyd South Assembly Member Ken Skates has called on the Welsh Government to help complete the first phase of the Llangollen Railway Extension.
After a site meeting along with Clwyd South MP Susan Elan Jones, Llangollen Railway volunteers and Denbighshire Council on Friday, the local representatives were told that the project is £160,000 short of its target to extend the heritage line to Corwen.
The AM immediately contacted Welsh Government officials to ask that they set up an urgent meeting with Denbighshire Council in order to hammer out a plan to complete the project.
Mr Skates said: “As everyone knows, Llangollen Heritage Railway is a jewel in the local crown and an important tourist attraction for the area. Everyone can see it has the potential to grow as an attraction and help bring in more visitors to the area.
“That is why I have been fully supportive of the extension project from the very start and a strong advocate of the line’s potential.
"This funding shortfall is an obvious concern and I have asked officials in the Welsh Government to meet with Denbighshire Council and its partners to ensure this important extension to Corwen is put back on track."
Susan Elan Jomes MP said: "The great thing about the Llangollen Railway is the sheer enthusiasm and energy of the volunteers who do such a great job keeping the line running.
"They believe passionately in this extension project and have pressed me hard to ensure its early completion because of the significant benefits it will bring both to the town and wider Dee Valley.
“Lots of work has been put into the extension plan by Denbighshire County Council and the Corwen business community to complete the historic link between the towns of Llangollen and Corwen and we mustn’t let this go to waste.”
Posted by llanblogger at 9:37 AM