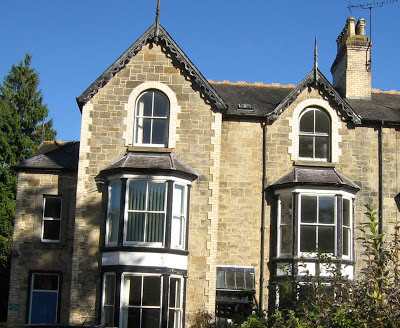 * The house up for sale on Abbey Road.
Health chiefs have been accused of selling off their assets in Llangollen even before they have finished consulting about a major shake-up of services which will radically affect the town.


The charge comes from a member of campaign group Keep Lllangollen Health Services, which has organised a public meeting tonight  (Monday) on the proposal by the Betsi Cadwaladr University Health Board to close the Cottage Hospital and replace it with a new health centre, possibly on the site of the derelict River Lodge just down the road.


Group member Martin Crumpton has released a statement in which he says: “Even before the end of the consultation period, Betsi Cadwaladr have made a tactical move to begin selling off its assets in Llangollen.”


And he gives an internet link to the property-for-sale website Rightmove which gives details of a three-storey Victorian house, known as Dol Afon Villas, on Abbey Road.


This, says the description, has been put on the market “on the instructions of Betsi Cadwaladr University”.


Mr Crumpton says in his statement: “ The property is on the Cottage Hospital site and within a car’s width of the hospital itself.


He adds: “This proves what we already know – Betsi Cadwaladr cannot be trusted.


“This will be raised at the public meeting by Keep Llangollen Health Services on Monday, October 15, 7pm, Hand Hotel, Llangollen. Please be there.”
Posted by llanblogger at 8:22 AM