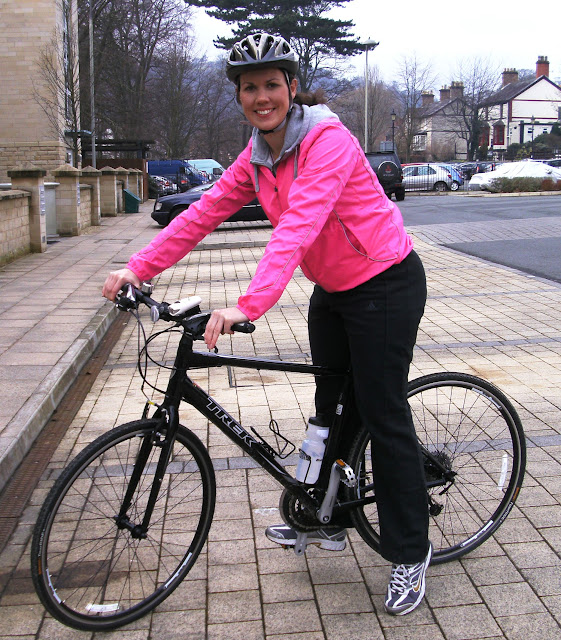 * Louisa Jones is ready to set off on her Indian adventure.


A member of Llangollen Operatic Society takes on a tough new role as she sets out on a gruelling 220-mile charity ride through India next month.
Louisa Jones, 33, who has taken many key parts for the society, is joining the Action for Charity’s Women V Cancer Cycle Challenge to raise cash for three women’s cancer charities.
The five-day challenge begins a few days after she flies out to India on November 9 and along the way will have to contend with soaring temperatures and remote, treacherous roads.
Louisa, who works as a European sales analyst for the Ruabon-based Flint Group printing and packing company, will join a group of around 100 other women from across the UK who will set out from the city of Agra – home of the iconic Taj Mahal - and pedal through the rural state of Rajasthan in north-west India, ending their momentous journey in the capital, Jaipur.
To maintain their tight schedule the intrepid cyclists, ranging in age from their twenties to sixties, will need to average around 40 miles a day.
The route followed will be far removed from the usual tourist trails and will be both on and off road.
Conditions will be challenging as the roads are mere dirt tracks in many places and the temperatures at this time of year will be around 36F in the daytime and plummeting at night.
The one consolation is that every night the riders will return to a camp set up for them in advance by challenge organisers.
In advance of her trip to the sub-continent Louisa has been raising the cash necessary to guarantee her a place on the ride.
Thanks to strong support from family, friends and work colleagues she managed to burst through the £2,800 qualifying barrier some months ago and pledges are still coming in.
She also plans to made a personal contribution of £500 towards her fundraising total, which will be distributed between Breast Cancer Care, Jo’ Cervical Cancer Trust and Ovarian Cancer Action.
To prepare for the tough physical test Louisa has been in training since January, completing rides through the countryside around her home of up to 40 miles.
She said: “I hadn’t really cycled properly since I was in my teens so the training was a bit tough at first.
“Eventually, I was doing up to 40 miles a day but I know that some of the other ladies who are going on the ride have been doing 70 miles.
“As a novice cyclist, I am aware I have a tough training regime ahead of me. However, I know it will be an amazing learning curve and a life changing experience. "
Louisa added: “I have chosen to support cancer charities because I think almost everyone knows someone who has been affected by cancer and what it can mean to them.
“In raising money I wanted to do something I have never done before.”
To make a contribution towards Louisa’s challenge go to http://www.justgiving.com/louisa-jones2012/eurl.axd/5805f2ef88f5e749aa33e11e94dbaeb7

Communications and technology permitting, we'll start bringing them to you a few days after she arrives in India on November 9.