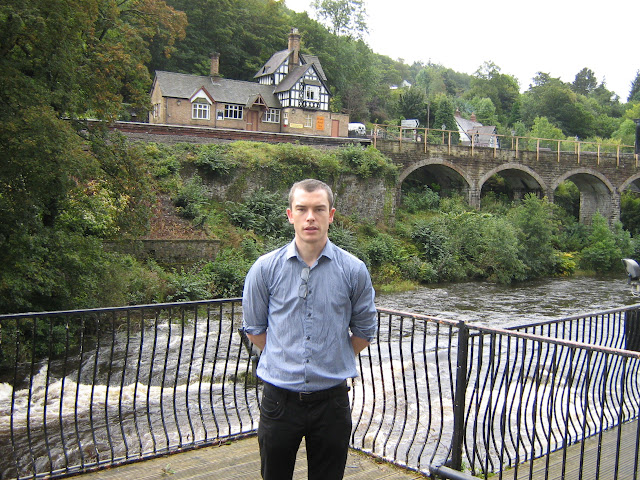 * New owner Seamus O'Keeffe in the area overlooking the river he intends to turn into a rooftop bar area. 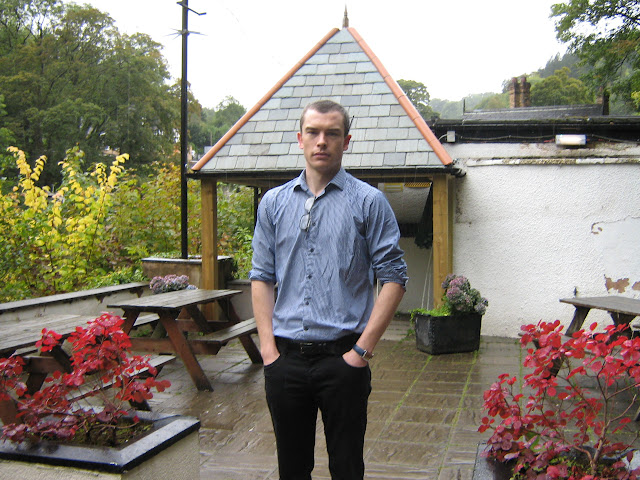 * Mr O'Keeffe in front of the pergola which will eventually lead into a new reception. 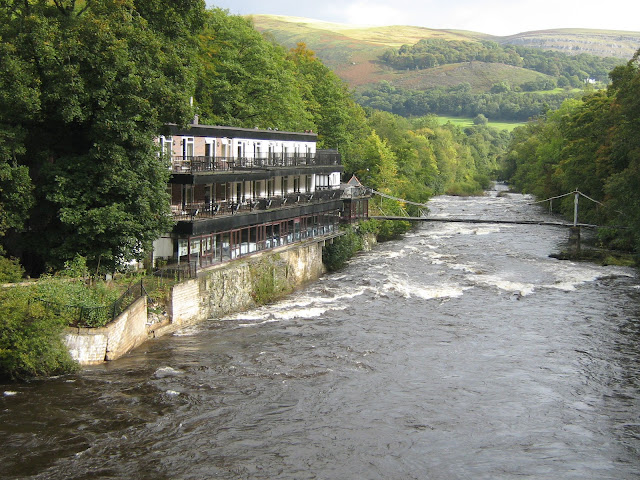 * The Chainbridge Hotel with its spectacular view over the River Dee.
ONE day in the not-too-distant future visitors to Llangollen may be able to take a leisurely horse-drawn boat trip along the canal from the wharf, stop off at The Chainbridge Hotel for lunch, stroll across the River Dee on the historic chain bridge itself and then walk up to Berwyn Station on the opposite bank to board a steam train on the heritage railway back into town.
That is the vision the man who recently became the new owner of the landmark hotel, which is sandwiched advantageously between the river and canal, after buying it a few months ago  for £500,00 out of administration where it had been placed following the collapse of Stephanie Booth’s Llangollen Hotels group of which it was part.
Another of the ambitions 28-year-old Seamus O’Keeffe has for the hotel is to see it return to the affections of local people, many of whom have never visited it in years.
Despite falling into administration in July last year, The Chainbridge continued to be operated by its loyal band of staff until June this year when it was acquired by Surrey-born Mr O’Keeffe for whom, as he explains, it is more of a family business than an investment opportunity.
Running hotels has been a family affair for him.
After reading history at Leeds University he went initially into public relations with a  London agency before taking off in a completely different career direction to help run the George III hotel near Dolgellau with his wife Elizabeth for his parents-in-law.
When The Chainbridge came on the market he saw it as an opportunity too good to miss and the family moved up to Llangollen.
While Elizabeth looks after their five-and-a-half-month-old son Dylan, Mr O’Keeffe runs the hotel seven days a week.
One of the most visible signs The Chainbridge is now under new management is the pergola he has had built on to the side of the hotel which points towards Llangollen.
From the small patio area, part of which this now covers, there will be a more natural progession for guests from the car park into a new reception area currently being built in what was a disused gym.
Replacing the rather dark and dated reception on the canal side of the property, this will be tastefully fitted out with stained glass and etched Victorian-style windows looking straight out on to the stunning vista of the famous old chain bridge just yards away.
Although this was closed for safety reasons about 30 years ago and is currently a sad, rotting hulk, major plans are afoot by its new joint-owners, Llangollen Town Council and Llantysilio Community Council, to bring it back to life.
In May, the Heritage Lottery Fund (HLF) handed over almost £30,000 for the first phase of a complete makeover of the bridge.

Proposals include its re-opening for public access and the resurfacing of a footpath to enable better disabled access.
This all fits in well with Mr O’Keeffe’s own ambitious plans for his hotel.
Part of his major investment plan – he won’t put an actual figure on it – is to turn one of the  30-odd bedrooms on the first floor into a bar area from which guests and visitors can step directly out on to a new rooftop seating platform directly overlooking the bridge, the Dee and Berwyn Station.
Outlining his ultimate vision, Mr O’Keeffe said: “In the future I would like to see people being able to come up the canal to the hotel aboard one of the horse-drawn boats that sometimes terminate at our car park, have lunch in the hotel and then walk across the river on a refurbished bridge.
“From there they can walk up to the station through a small tunnel which runs under the track and board a steam train which will take them back to Llangollen.”
Revealing his other plans for the hotel, he said each of the remaining bedrooms – the four on the ground floor and the 32 upstairs – would be completely refurbished, along with guest corridors, the ground floor bar area and the large function room, which he believes was the first in Wales outside of churches and registry offices to host a wedding ceremony.
Outside the building, exterior walls will be re-rendered but will keep their familiar black and white, half-timbered look.
The new reception area is due to be open by Christmas and other refurbishment will be complete within 12 months.
Already, the hotel’s restaurant menu has been completely re-written and centres on first-class, locally-sourced ingredients.
It will be open on Christmas Day for a £49.95-a-head festive meal.
Generally, Mr O’Keeffe says his aim is to get as much of the work on the hotel finished in time for the re-opening of the bridge, which he understands could be the autumn of 2014 – its 200th anniversary.
However, despite the major facelift he has planned, he says he is determined never to forget the history of The Chainbridge, which is originally believed to have been the home of local entrepeneur Exuperious Pickering from about 1827 until it was turned into a hotel soon afterwards.
Pickering built the chain bridge across the Dee in 1814 from a network of handmade chains to facilitate the transfer of coal and lime from his mines between the canal and the main A5 road.
The original bridge was refurbished and strengthened by Sir Henry Robertson, who owned the nearby Brymbo Steel Works, in 1870.
In 1928 heavy floodwaters, combined with the partial damming of the river by fallen trees, caused the Dee to rise dramatically and destroy the bridge.
Undeterred, Sir Henry organised the retrieval of the original supporting chains and rebuilt the whole structure to a much stronger design in 1929.
A display on the history of the hotel and bridge is currently set up in the function room, with black and white pictures loaned by Llangollen Museum.
Mr O’Keeffe might have a feeling for the hotel’s past but he also has an eye on the future and  has two goals.
He said: “My first is to make it a place where the residents of Llangollen want to come again and the second is to make it a successful business
“Any profits we make here will be re-invested into the business and we will be putting back as much as we can over time to make sure The Chainbridge is successful.”
Posted by llanblogger at 8:17 AM