Food festival one of best ever, say organisers 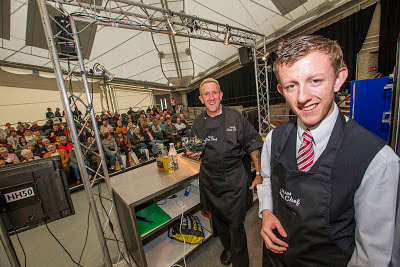 before going on stage.

* (Below) Sampling the flavours - Rebecca Owen, 10,
from Llangollen.
An array of "world class, world beating" produce attracted thousands of people to a food festival.
Food lovers from across the UK made a bee line for the Hamper Llangollen 2012 which was described as one of the best ever.
They were entertained by a trio of Welsh celebrity chefs including Graham Tinsley, the star of ITV's Taste the Nation and a former captain of the Welsh Culinary Team. 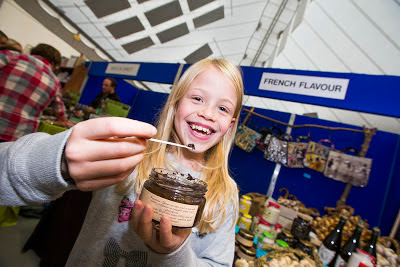 He was joined in the show kitchen by S4C favourite Dudley Newbery and the ever popular Dai Chef.
Another star attraction was the award-winning Master Chef Brian Mellor whose career came full circle.
Brian, who has cooked for TV celebs, Prime Ministers and Royalty, now runs a cookery school in Chester. He revealed he began his stellar career nearly 30 years ago - at The Hand Hotel in Llangollen.
After an absence of several years, it was also an emotional return for Dai Chef whose son, Dan is keeping a promise his dad made to superstar tenor Luciano Pavarotti.
Dai famously cooked for Pavarotti when he came to perform at the International Eisteddfod in 1995, exactly 40 years after he first came to Llangollen as part of his father's choir from Modena, in Italy.
Seventeen year old Dan is already making a name for himself as a front of house specialist and is studying Restaurant Supervision at Llandrillo College.
Dan has just won a prestigious Welsh colleges competition to work for a fortnight at the world-famous Osteria Francescana restaurant in Pavarotti's home town of Modena.
Proud dad Dai, who lived in Chirk for many years but is now the Chef Director of the Ship Inn, at the Anglesey beauty spot of Red Wharf Bay, said: "It's fantastic to be back in Llangollen, it's like coming home."
"I am particularly proud be back with my son, Dan, after he was interviewed at Buckingham Palace.
"At 17 years of age, he was judged to be the best in Wales for front of house and he won the Gold Medal.
"On the back of that, part of the prize is to go to Osteria Francescana, the fifth best restaurant in the world.
"The funny thing about that is that I cooked for Luciano Pavarotti when he came to Llangollen and Dan sat on his knee and he said 'bring him to Modena'. This is a lovely twist that Dan is actually going there to work next April.
"He's just returned from Slovenia and two weeks ago he waited on the tables at the Queen's Awards dinner, so it's really exciting to have him here on stage with me today.
"My daughter, Megan, who's only seven, is on her 43rd cookery demonstration today - both she and Dan are live on stage here at Llangollen."
Dan said: "I am really excited about going to Modena, it's a fabulous opportunity."
Guest of honour at Hamper Llangollen was Alun Davies, Deputy Minister for Agriculture, Food and Fisheries, who described the produce on show as "world class and world-beating".
He said: "It's a great event and it's important because it allows us to recognise and appreciate not only the food that's produced here but where it is as part of our community.
"What I enjoy about the food festival here in Llangollen - and elsewhere - is the celebration of food culture, Welsh identity and the economy.
"The Welsh Government is looking at supporting producers, processors and retailers here in Llangollen today.
"When I leave here I am flying to Paris to support producers in one of the biggest food fairs in Europe.
"We are spending our time working with people to improve our product and create a market for that product. I am very enthusiastic about what we are able to do."
One of the main driving forces behind the festival is businessman Colin Loughlin, Chair of the local committee that runs the event, supported by the rural development agency, Cadwyn Clwyd.
Cadwyn Clwyd’s contribution came via the Rural Development Fund for Wales 2007-2013, which is funded by the European Agricultural Fund for Rural Development (EAFRD) and the Welsh Government.
Mr Loughlin said: "People started queuing to get in at 9.45am on Saturday - the turn-out has been brilliant.
"There's a great atmosphere there's a lovely ambience and it's all come together really well. I am absolutely delighted.
"It's a really important event for the town of Llangollen and the wider rural community. Weare integrating the festival and the town."
Andrew Jedwell, the Chair of Cadwyn Clwyd, added: "Food is an important part of the rural economy and Cadwyn Clwyd has very actively fostered development of the food sector. We think there's a lot more potential still.
"Hamper Llangollen provides a wonderful shop window, it gives people the opportunity to see the full breadth of products that we produce in and around the area and develop a sense of pride in local produce."
Wrexham-based Orchard Pigs chose Hamper Llangollen as the place to launch their new range of artisan bread which was a sell-out success.
Among the other happy stallholders was chocolatier Jo Edwards, from Aballu Truffles, in Rossett, who was unveiling her new chocolate spread for after dinner crackers.
She said: "Hamper Llangollen is really nice event, everyone is enjoying themselves and it's great. And we're selling lots of chocolate, we're doing really well."
It was a sentiment echoed by Carol Allen, from Llanvalley Natural Products, who makes soap from goats' milk.
She said: "It's lovely, the weather's good, the atmosphere's good and the food is glorious. Everybody is happy and everybody visiting the stalls is really enjoying it." 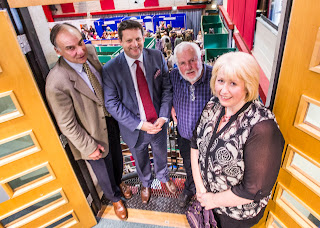 * Alun Davies AM, Deputy Minister for
Agriculture,
Food Fisheries and European Programmes, at the opening
of the festival, with, from left,
Andrew Jedwell,
Chairman of the Board of Directors at Cadwyn
Clwyd, Festival Committee Chair Colin Loughlin and
Lowri Owain, Chief Executive, Cadwyn Clwyd.
Posted by llanblogger at 8:38 AM