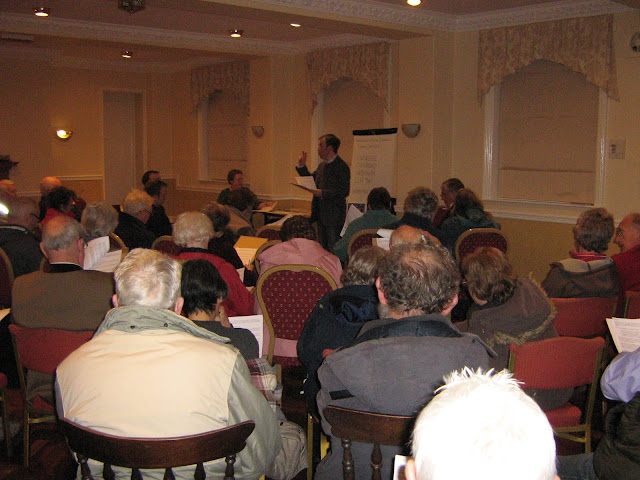 * Mabon Ap Gwynfor addresses the audience at the public meeting.


PEOPLE in Llangollen are not going to let their community hospital go without a fight.
That was the message which came from a packed public meeting at The Hand Hotel in the town last night (Monday).
Attended by around 60 people, it was called by the newly-formed action group opposing controversial plans by the Betsi Cadwaladr University Health Board (BCUHB) to close the Cottage Hospital and replace it with a new health centre, possibly on the site of the derelict River Lodge hotel just down the road.
People at the meeting took up the invitation from members of Keep Llangollen Health Services to write letters opposing the plans to the BCUHB and to patients’ watchdog body the Community Health Council.
A number put pen to paper at the meeting.
They also signed a protest petition which has been going around Llangollen for the past few weeks and currently contains over 1,000 local names.
KLHS member Maria Haines said there were a number of concerns about the board’s proposals and that it was essential local people expressed their opinions before the official public consultation ends on October 28.
She explained that while local people might want to see a new health centre provided, many were unhappy the board had already said it would not offer the same range of facilities as the Cottage Hospital, including care beds and a minor injuries unit.
There was also fears the board might not be able to attract the necessary finance to pay for the new centre and, even if it did, there could be a gap of two-three years between the hospital closing and the new centre being opened, she claimed.
She added there were further worries about who would pay for the enhanced community care for the elderly which the board says will replace care beds at the hospital.
Ms Haines said: “We need to ask the health board to look again at this and come up with more options.”
Another group member Mabon Ap Gwynfor branded the health board’s proposals as “a sham and faulty” and said they would end up costing more to implement than any savings they would achieve.
He added: “I would urge everyone to send in letters setting out their views about these proposals to the health board and the Community Health Council.
“They should know the strength of feeling there is in Llangollen.
“We are not going to let the hospital go without a fight.”
* The address to write to at the health board is: Mary Burrows, Chief Executive, Freepost RSZZ-SGXY-TSEZ, Bertsi Cadwaladr University Health Board, Matthew House Unit 35, Llys Edmund Prys, St Asaph Business Park, St Asaph, LL17 0JA.

* Address of the Betsi Cadwaladr Community Health Council is: Cartrefle, Cefn Road, Wrexham, LL13 9NH.
Posted by llanblogger at 8:32 AM