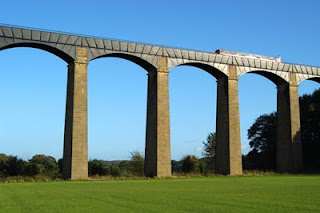 The Leader is reporting today that the body of a woman has been found at the foot of the Pontcysyllte Aqueduct, near Llan.
The woman, who is said not to have been formally identified, was pulled from the water in Trevor on Monday shortly after 11.30am.
The Leader story says police believe the woman may be from Shropshire and are not treating the death as suspicious.
The 120-ft aqueduct was cordoned off for more than an hour while police made investigations.
The story adds that an ambulance and one fire engine from Llangollen were called to the World Heritage Site but were not required to take action.
Posted by llanblogger at 3:46 PM