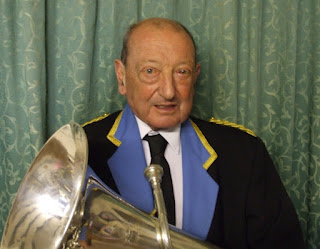 It is with great regret that Llangollen Silver Band has announced the death on July 31 of its musical director Albert Hammonds, long service medal holder and well respected member of the brass band community in North Wales.
Albert had been a keen brass band player since childhood and was a member of Llangollen Silver Band for over 66 years.
In his youth he would happily play for any band in the North East Wales area that needed a baritone player, and he often boasted that in those days it was possible to play at rehearsals for a different band every day of the week with minimal travelling.
A well-known figure in Llangollen, he has more recently been able to enjoy the pleasures of walking his dogs, looking after his grandchildren, playing bowls and chatting with his many friends, but most of all he will be remembered for his dedication to the survival and prosperity of the band.
His role over the years encompassed playing the baritone horn, conducting, organising and fundraising, especially towards the costs of the building of the new band-room.
Although his health had been failing him since March this year, fellow band members were delighted that he was well enough to be with them for the grand opening of the new band hall on June 16.
Band spokeswoman Lynda Kay said: “Albert’s enthusiasm and sense of humour kept the band going through good times and bad, and his unshakeable belief in the band helped carry it through some difficult times and aided it in becoming the successful organisation it is today.
“I know I speak for all of Llangollen when I say that we will sadly miss the man we have come to think of with great affection, our dear friend Albert.”
The funeral will be held at 11am on Tuesday, August 7 at St Collen’s Church, Llangollen.
Posted by llanblogger at 10:42 AM