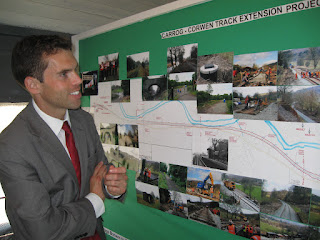 Llangollen Station is hosting an exhibition showcasing its plans to extend the famous heritage railway line to Corwen.
It is based in a special coach situated behind the signal box.
A new feature shows the route of the trackbed from Carrog and Corwen and highlights various features along the 2.5 miles length of what is Phase 1 of the extension project
A selection of photos shows what has been achieved so far and aspects still to be tackled.
Track has been re-laid as far as Plas Bonwm Farm and a further extension of the track near to the site of the former Bonwm halt will complete stage 1 of Phase 1.
The gate from the A5 road at the former Bonwm Halt site provides the only access for the delivery of materials to the site and will, of necessity, remain available whilst stage 2, the final stretch onwards to Corwen, is prepared.
There are significant items of infrastructure requiring attention on this stretch, including repairs to over bridge 28, various culverts and under-passes, as well as the provision of the temporary platform and the access ramp to it at the Corwen end.
All these aspects need to be tackled before any further track is laid in 2012/2013.
Laying track may be the exciting element of railway expansion, but is the relatively easy part of the overall exercise once the structures are in place.
However, even with volunteer labour, all this costs money and funds to allow for the continuation of the project are needed to ensure its completion and the return of trains on this section in 2013.
The Railway says you can help by making a donation to the Llangollen Railway Trust’s Corwen Appeal.
In the exhibition coach a donations bucket will welcome your small change at the very least and it will contribute towards the match funding needed to complete this exciting project.
Otherwise, forms are available to provide for gift aid donations or sale of the traditional Edmondson type tickets in support of work on the extension.
The exhibition coach is open subject to availability of volunteer supervision during the summer period.
Details of other aspects of the Llangollen Railway are also on show and information about volunteering is available
The exhibition was recently visited local Assembly Member Ken Skates.
Railway spokesman George Jones said:  “He was interested and pleased to see the progress achieved and what remains to be done.”
The display was also viewed by First Minister Carwyn Jones when he visited the railway on July 5.
Posted by llanblogger at 10:38 AM