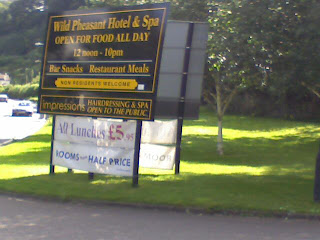 Llangollen’s prestigious Wild Pheasant Hotel and Spa has been sold for around £2.2 million, the Leader is reporting today.
The complex, off the A5, was part of the hotel empire run by businesswoman Stephanie Booth until the group crashed in July last year.


The Wild Pheasant continued to trade during its period in administration and has just been sold by the Manchester office of real estate advisers  Colliers International to investor Asif Siddiqui, says the report.
Despite being in administration, the hotel generated a turnover of £1.4 million in 2011 and made a trading profit of £308,000.
The property combines an original 19th century hotel with a modern luxury bedroom and spa wing.
It has 46 en suite rooms, a function room which can cater for up to 200 people, the 60-seat Yew Tree Restaurant and the courtyard bar.
Its sale follows that of other hotels in the former Llangollen Hotels group, including the Bodidris Hall at Llandegla to a private buyer for an undisclosed sum in November last year and the Chain Bridge Hotel in Llan to Surrey businessman Seamus O’Keefe for £500,000 this June.
Posted by llanblogger at 3:55 PM