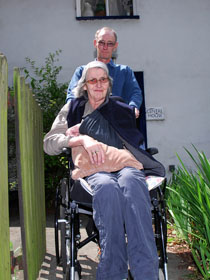 Older people in Wales are missing out on the essential services they need to recover after a stay in hospital because of confusion around what constitutes reablement services, according to a new report by older people’s charity WRVS.
The report, Getting back on your feet: reablement in Wales which examines reablement services available across Wales – those services that help people with poor health live as independently as possible in their own homes – found that there are huge inconsistencies in the services delivered by local authorities and health boards. This is despite the Welsh Government identifying reablement as a vital part of social services reform.
A key finding of the report was that there is a tendency for health boards and local authorities to concentrate on services that focus on improving physical well-being, to the detriment of those which address emotional and social well-being; services which can be just as important when nursing a patient back to full health.
The report calls on the Welsh Government to develop a reablement framework for Wales, outlining what exactly is meant by reablement and what features public bodies should provide. This includes services to tackle isolation and extreme loneliness, which can lead to a severe decline in well-being.
The serious consequences of loneliness and the importance of such services were highlighted by recent WRVS research, Loneliness rife among older men, which identified that Welsh men over the age of 75 who live alone are the loneliest in Britain and as a result of feeling extremely lonely are likely to suffer from depression.
The report also shows that because there is no standard definition of ‘reablement’, there is confusion surrounding which services fall into this category, resulting in the appearance that some local authorities spend ten times more per head of population than others.
Examples of good practice include the local Betsi Cadwaladr health board, which recognises the role of befriending services as part of reablement.
Previous research (Social Services Improvement Agency (2011) Better Support at Lower Cost, Cardiff: Social Services Improvement Agency) has suggested that reablement services such as those provided by WRVS which tackle loneliness and isolation play a vital role in reducing the need for home care and in decreasing hospital admissions. These services see volunteers paying visits to older people, accompanying them on shopping trips and making sure they pick up any prescriptions from the doctor.

"Older people are at their most vulnerable after a stay in hospital and need services that focus on not just their physical well-being, but their social and emotional well-being as well. The Welsh Government is right to identify reablement as a vital part of social care in Wales but they now need to clear up any confusion about what services should be offered by public bodies. Until there is a standard framework for public bodies, older people in Wales will be missing out on essential services which have a real effect on their health and can keep them out of hospital.

Dr Ed Bridges, WRVS Public Affairs Manager for Wales, said: "Through our work with older people, we know that services that focus on emotional and social well-being, such as those that encourage increased social interaction, are hugely beneficial in combating health problems. We’d like to see more services such as befriending, occupational therapy support and home adaptations which mean older people can stay happy, healthy and independent, and out of hospital for longer."

The report makes a number of recommendations, including:

Download a copy of Getting back on your feet: reablement in Wales
Posted by llanblogger at 1:34 PM