Quest for the perfect pint is over ... 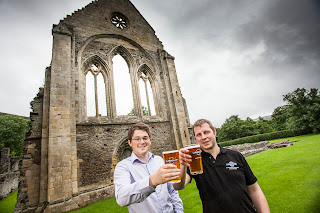 *A toast to the new Holy Grail Ale at Valle Crucis Abbey in time for the Llangollen Food Festival with Robert Price from Cadwyn Clwyd and Ynyr Jeffreys-Evans of Llangollen Brewery.


The quest forthe perfect pint is finally over.
The award-winning Llangollen Brewery has created a new beer called Holy Grail Ale.
It's been inspired by a local legend involving the great Cistercian abbey of Valle Crucis and Dinas Bran Castle, on the hilltop towering over the town.
According tothe story, the castle is the final resting place for the Holy Grail, the cup that Christ drank from at the Last Supper and that there is a tunnel all theway down to the abbey below.
Holy GrailAle will be launched at Hamper Llangollen 2012, the annual food and drink festival on Saturday and Sunday, October 20 and 21.
The brewery is aiming to quadruple production this year and the new beer is central to their expansion plans.
But they would probably have needed even more capacity had the monks been around still -they each drank up to eight pints a day.
The idea for Holy Grail Ale came to head brewer Ynyr Jeffreys-Evans  came after reading a book called, The Keys to Avalon.
Author and historian Steve Blake claims there is evidence from modern Grail myths that Joseph of Arimathea came to North Wales.
Steve said: "These Grail romances actually state that Joseph of Arimathea landed in Nor Gales, which is North Wales, and was captured by the King of the region Crudel.
"On being rescued by Avalwch, after whom Avalon is reputedly named, he travelled to Castle Corbenic where the Holy Grail was held in safe keeping.
"Corbenic is French for crow or raven which, when translated back into Welsh becomes Castell Dinas Brân, the spectacular ruin which overlooks the town of Llangollen."
Roger Farnham, Lead Custodian at Valle Crucis Abbey, which is looked after by the ancient monuments organisation, Cadw, was delighted to hear about the new beer.
The 13th century abbey is a popular destination for visitors with up to 10,000 people making a pilgrimage there every year.
Roger said:"Some people believe there’s a tunnel leading from here up to Dinas Bran.
"I love the idea of the legend living on in the form of this new beer. The monks enjoyed a drop of beer, they drank eight pints a day because they couldn't trust the water.
"The beer had a very low alcohol content - the term small beer is named after what monks used to drink.
"I think they would have approved of Holy Grail Ale because there would have been brewery here, right next door to the church."
Ynyr is in partnership with his cousin, Steven Evans, who has been the landlord of the  Abbey Grange Hotel for more than 25 years and is also a real ale aficionado.
He said:"We started the brewery which is based next door to the hotel about five years ago.
"It's got to the point where we need to increase the capacity again,  so this October we’ll be going four times bigger to cope with demand.
"All of our bitters are traditional whereas Holy Grail Ale is a new style of bitter, it's a lighter, more citrusy style of bitter - and very refreshing. This one isgoing to be about four per cent proof.
"The reaction we have had to our tasting sessions has been phenomenally positive, I believe the quest for the perfect pint is finally over.
"We chosento launch Holy Grail Ale at the food festival because it is such an important event for us.
"It provides us with a public showcase and an opportunity for people to taste our beers.
"There is a growing demand for real honest to goodness beer so we have high hopes for Holy Grail Ale. We're confident it will take off really well."
It will be one of a host of fine beers being featured at this year's festival which is supported by the rural development agency, Cadwyn Clwyd.
Cadwyn Clwyd’s contribution came via the Rural Development Fundfor Wales 2007-2013, which is funded by the European Agricultural Fund forRural Development (EAFRD) and the Welsh Government.
Starring at this year's event will be a trio of Wales's top chefs.
Graham Tinsley, the star of ITV's Taste the Nation and a former captain of the Welsh Culinary Team, will be joined in the show kitchen by S4C favourite Dudley Newberry.
Completing the hat-trick will be the ever popular Dai Chef, who is returning to the event after an absence of several years.
Robert Price, Cadwyn Clwyd's agri-food project officer, said: "In addition to many favourites, we have lots of new food producers wanting to come this year.
“Thanks to a whole host of indigenous companies, North East Wales is rapidly establishing a reputation as a centre of excellence for high quality cuisine.
“The food festival is a perfect shop window for the companies who form the backbone of our rural economy.
"The location of the Pavilion is absolutely spectacular - I can't imagine that any other food festival in the UK has a more beautiful setting."
For more information about Hamper Llangollen 2012 visit www.llangollenfoodfestival.com

Posted by llanblogger at 1:13 PM