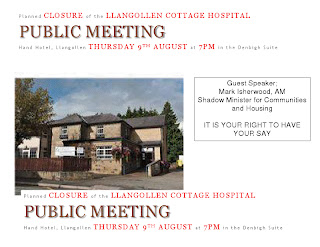 * A poster advertising the public meeting.


A new protest group has organised a public meeting about the proposed closure of Llan Cottage Hospital.
Llangollen Protest was formed by campaigner Martin Crumpton only last week to contest plans announced recently by the local Betsi Cadwaladr University Health Board to close the community hospital with a view to replacing it with a new health facility on the site of the derelict former River Lodge just up the road.
Some services currently provided at the Cottage could be transferred to Chirk, a report by the health board says.
Mr Crumpton, who is separately chair of the group Llangollen Preservation which is opposing plans for a new Sainsbury’s supermarket on the Dobson & Crowther factory site in Berwyn Street, says he has now gathered the signatures of six local residents needed to call a public meeting on the hospital issue.
This, he has announced, will be held at the Hand Hotel in the town on Thursday, August 9, at 7pm.
Posters being distributed across the area say that guest speaker on the night will be Mark Isherwood AM, Shadow Minister for Community and Housing in the Welsh Assembly.
Mr Crumpton predicts that during the meeting the required number of signatures will be gathered to force a referendum in Llan on the hospital closure question.
In a statement, Mr Crumpton said:  “Every grown-up knows that when Llangollen’s hospital beds leave, they will never return.
“Llangollen is an elderly town, with a high average age and a considerable number of residents in their seventies, eighties and nineties, many in sheltered housing and care homes – Llangollen has many of them, and our town still acts as a magnet to retirees, as it has for decades.
“Brief stays in the Community Hospital are commonplace in this group, and it’s easy for friends and relatives to visit patients there and far less distressing for the patients
“The Llangollen Community Hospital was bequeathed to the town by the Best family of Vivod, and it’s where blood tests are taken, annual retinopathy screening takes place, physiotherapy, minor injuries and dressings, and consultations by doctors both local and from Wrexham Maelor are held, plus many other routine medical procedures.
“The hospital is a testament to the value of local health care.
“The only bus from Llangollen that passes Wrexham Maelor is the two-hourly Barmouth X94. No bus service goes directly to Chirk hospital.
“The regular bus services for both Wrexham and Chirk involve walking a considerable distance to their respective hospitals, which many simply cannot do. For those without cars, it’s hospital transport or nothing. The closure must be stopped."
He added: “We are required, by procedure, to notify the Town Council that we will hold a public meeting if we can gather six signatures of local electors. We have them.
“At the meeting, it requires 10 electors to call for a referendum. We will get them.
“Under Schedule 12, Part 3, Paragraph 18 of the Local Government Act 1972, we will have our referendum. With it, we will send a message loud and clear to Betsi Cadwalader and the Welsh Government that our hospital is vital to us and we won’t let it go
“The issues are complex but a negotiated compromise is always better than a fait accompli.
“Enough is enough. First there’s the town-killing supermarket issue hanging over us, then the much-needed and supported Community Centre of Powys Fadog at Riverside Lodge was politically sabotaged – now they want to close our hospital.
“We’re being systematically asset-stripped and we’ll soon be a candidate for regeneration.
“In a matter of just a couple of years, the charm, the warmth, the very character of Llangollen is being torn asunder.
“Has someone got it in for Llangollen?”
Posted by llanblogger at 10:47 AM