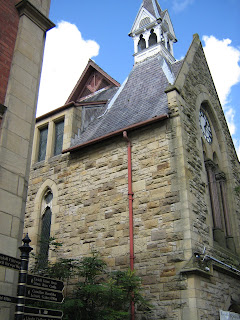 llanblogger exclusive
Town councillors raised no objections to new access details submitted for the scheme to build a new print works on land at Cilmedw Farm, Llangollen, at a meeting of the planning committee on Tuesday night.
The scheme is closely related to a separate one to build a new Sainsbury’s supermarket on the site currently occupied by the Dobson & Crowther works off the A5 nearby.
Planning committee chairman, Cllr Mike Adams, said the revised scheme for Cilmedw had been submitted because the access needed to be widened and made safer.
There would also be traffic lights added as well as widening the road.
Cllr Phil Thane said there were already traffic lights at the end of Castle Street and additional lights near the proposed works entrance could  lead to traffic tailbacks which would cause an obstruction to the canoeing centre nearby.
Cllr Adams said he thought this potential problem may have already been identified and looked into by county council planning officers.
The mayor, Cllr Jon Haddy, said that although heavy traffic along that stretch of road may have been a problem 15 years ago before the opening of the A55 took congestion away from the town, it was no so now.
There were now, basically, only two busy times of the week when that stretch of road was busy – “on Saturdays going out and on Sundays coming back”.
Members raised no objection to the plan, with two members abstaining.