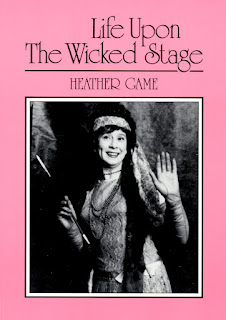 Theatre stalwart speaks in Llan
Members of the “This and That” social group at Llangollen Methodist Church were treated to a talk by well-known stage entertainer Heather Game at their meeting in the Memorial Hall on Monday evening.
Mrs Game has been a stalwart of the amateur stage in North Wales and the Midlands for the past 50 years and her long career also included a venture into the professional world when she did stints on television and in films.
For many years she ran her own stage production company based in Shrewsbury and she is also the author of a book entitled “Life Upon the Wicked Stage” which chronicles her life and career.
Her hour-long talk was based on her book and included many interesting and amusing anecdotes which at times brought hearty laughter from the audience.
In one of her first appearances on stage, in a village hall production playing the title role in Snow White and Seven Dwarves, she told of how members of the WI were perched precariously on their knees to play the dwarves when an inadvertent shove in the ranks brought the last one in line sprawling against the scenery.
In another amusing tale Mrs Game recalled how while wearing hair braids built around wire inserts in a subsequent production, one of these sprung up as she was being lifted in a dance sequence and smacked her male partner in the face.
There were also stories from Mrs Game about the joys and tribulations of on-stage kissing sequences.
She told how on one occasion she ended up herself wearing the stick-on moustache of the man she was kissing and, on another, how her face turned bright yellow when it ended up smeared with the stage make-up  of the actor playing the King of Siam.
After overseeing – and appearing in - many successful productions at the old Music Hall theatre in Shrewsbury, Mrs Game ceased leading her production company a couple of years ago.
However, she still sings regularly with a number of local companies and tours the region to give her highly entertaining talks.
Posted by llanblogger at 9:31 AM