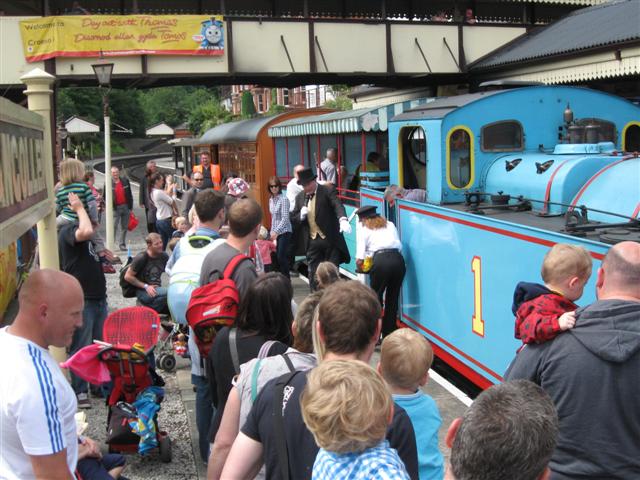 * Thomas the Tank events at Llan Railway were a success
despite other diversions.

Llangollen Railway says last week’s Thomas the Tank events it hosted were a success, despite people staying at home to watch the Olympics on TV and a weather forecast that didn’t predict much sun.


Railway spokesman George Jones told llanblogger: “Our considered opinion is that it was a successful six days for the Day Out With Thomas event but not a record breaker in terms of attendance at Llangollen.


“It was notable that the attendance was generally from within our normal 50-mile radius catchment area with relatively few from further afield in England as we might expect in August.


“Overseas visitors were noted from Holland, Spain, France, China (Shanghai) and a Japanese family living in Germany - again less than usual at this time of year, although visitors from other European countries and North America, Australia and New Zealand were noted on other days.”


He added: “It is thought a combination of the Olympics, (was everyone supposedly watching TV?) the weather forecast (not necessarily accurate for North East Wales) and perceived lack of spending money may have impacted on the number of visitors.


“One hopes the post-Olympic period will reverse some of this trend but a journey around North West Wales last week seemed to confirm a generally depressed summer trade.”


Building on the success of last Friday when 150 Americans stopped off at the station when their cruise ship, the Carribean Princess, docked in Liverpool, the Railway welcomes a similar group of tourists tomorrow (Friday).


At around 1pm, 135 people from the Intercruises ship “Prinsendam” will arrive at the station to enjoy a trip along the line to Carrog.


This Saturday (August 18) the Railway is hosting  a special event called “Murder at the Speakeasy”.


When the joint’s popular singing star is found murdered in her dressing room things take a nasty turn for everyone present – and that includes the audience.It starts at 7pm and food is served on platform 1 at 7.15pm.


Themed dress optional and there’s a chance to win a bottle of wine for the best outfit.Tickets are £26 per person and includes food and a return journey.

Posted by llanblogger at 7:40 AM