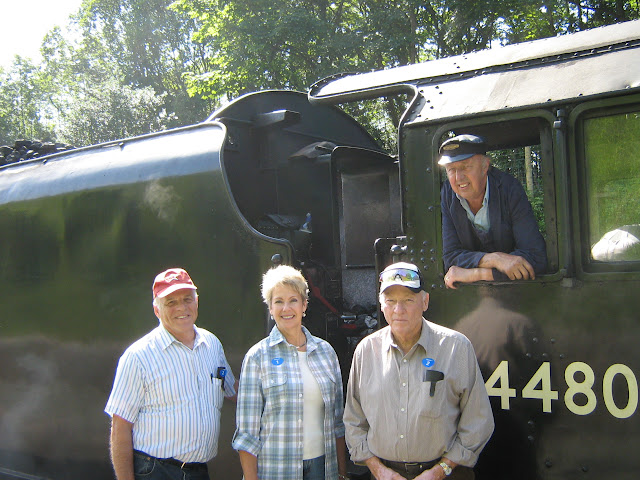 * From left, American tourists Greg Piegari from Houston, Texas, Sandy Shafter from
Atlanta, Georgia and L.C.Partin from Richmond, Virgina with engine driver Mike Compton at the
controls of the Black 5 engine. 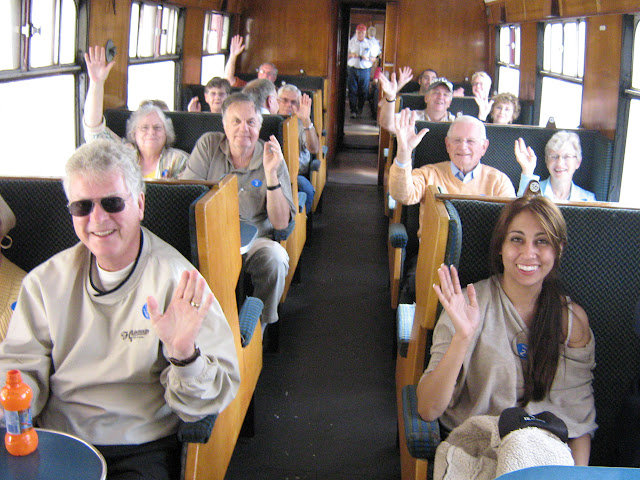 * American visitors in their carriage on the train wave "hi" for llanblogger. 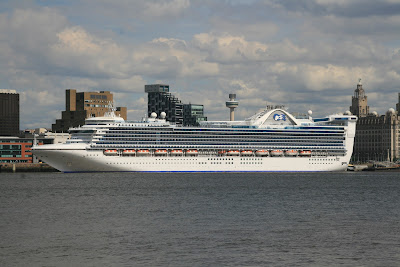 * The Caribbean Princess docked in Liverpool.

A group of 150 American tourists stopped off at Llangollen Station today (Thursday) as one of the highlights of their round-Britain cruise.


The three coach-loads of visitors were from the luxury cruise liner Caribbean Princess, which docked in Liverpool in the morning.


They journeyed over through the North Wales countryside via Mold and Ruthin to arrive at the station mid-morning and board two waiting coaches hauled by a Black 5 steam engine for a trip along the line – in a brilliant sunshine – to Carrog.


Later, they enjoyed lunch at the Wild Pheasant in Llangollen before touring Chirk Castle during the afternoon and then heading back to re-join their ship.


One of the group, Greg Piegari of Houston, Texas, said: “I’ve never been to Wales before but I’m really enjoying the trip – especially this part at the steam railroad – as there is so much to see.”


The previous day the tour group had docked in Belfast and this evening they are due to set sail for their next port of call, Dublin.


Llangollen Railway spokesman George Jones said: "The organised coach parties for tourists to pay a day visit to North East Wales from cruise ships visiting the River Mersey shows how economic advantage can be gained from activity outside the immediate region.
“With Llangollen just over an hour away from the port of call, the passengers can enjoy the delights of North East Wales by easy travel convenience and take in a trip on a steam train as part of the visitor experience, something which is always popular.
"Special arrangements are being made to accommodate the visitors on a train during what is a Day Out With Thomas' event and they are getting an unexpected view of engine No.1 as they pass through Llangollen station."


·         MS Caribbean Princess is operated by Princess Cruises and has a capacity of over 3,600 passengers.


·        She was the first modern cruise ship with an outdoor theatre,