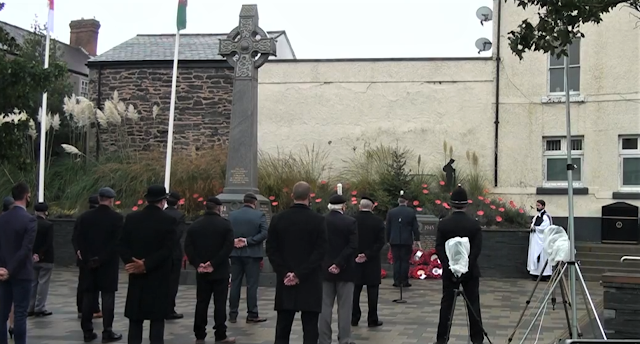 * Veterans take part in the remembrance service in Centenary Square.

This morning a film crew from Llangollen company Orb Sound & Lighting filmed and live-streamed on Facebook a small group of local forces veterans taking part in the traditional service of Remembrance in Centenary Square.

The service, which included the traditional wreath-laying on the war memorial, was led by Llangollen Vicar, Father Lee Taylor.

This followed Llangollen Town Council’s decision, announced recently, that due to coronanvirus restrictions it would not be staging the usual public ceremony.

In advance of the screening Orb specifically asked members of the public not to gather at the square to watch the event.

These pictures of the service were taken remotely by llanblogger.

The service was watched live by around 40 people.

* The area's two county councillors, Melvyn Mile (left) and Graham Timms laid their own wreath on the war memorial.
Posted by llanblogger at 11:26 AM