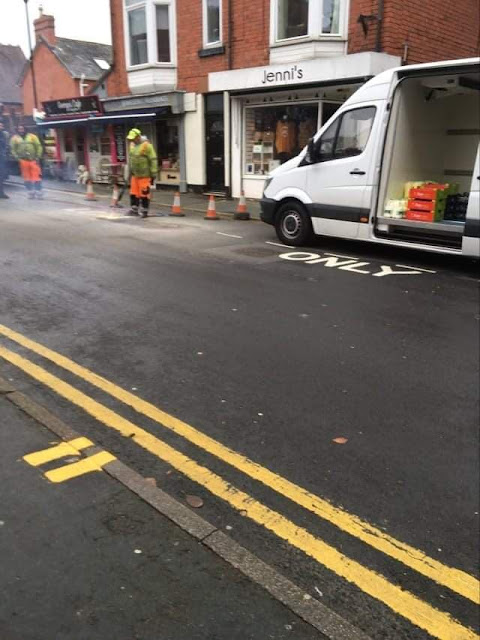 * Workmen at the loading bay outside Jenni's shop in Market Street.

A loading bay placed outside shops in Market Street as part of the town's new social distancing traffic measures earlier this week has been moved by workmen today (Friday).

However, people have been unhappy about some of the changes, including Jenni Lloyd who runs Jenni's shop in Market Street.

She started a petition to be handed to Denbighshire County Council which attracted almost 100 signatures in its first couple of hours.

Complaining about the loading bay outside her shop, she said: "The lorries are 5ft from my window and it's fairly constant as the bay is servicing the whole of Castle Street."

A meeting between her, other concerned local people and a county official was held earlier this week and this morning workmen could be seen apparently moving the loading bay.

Jenni Lloyd said: "I am delighted and grateful for all the overwhelming support I have received from so many people this week.

"I feel as though the whole town has been behind me!"

Llangollen County Councillor Graham Timms said: "After discussions with fellow Llangollen county councillor Melvyn Mile and I it has been agreed to move the loading bay to our originally proposed location, which is on the opposite side of Market Street, starting just beyond the shops. The taxi rank will stay where it is."

Posted by llanblogger at 1:31 PM