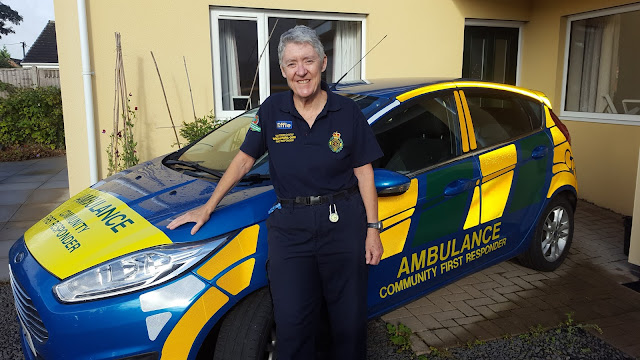 * Effie Cadwallader with a car similar to the dedicated first responder one she is to have.

A fund-raising campaign to provide a Community First Responder with a dedicated car to attend life-threatening medical emergencies in this area has exceeded its £10,000 target only two months after being launched.

elsh Ambulance Service volunteer Effie Cadwallader is preparing to take delivery of the rapid response vehicle which will be used to answer calls along the Wrexham-Shropshire border.

Effie began her campaign in September with an online crowd-funding appeal. She has since received a massive boost when the Welsh Lottery fund decided to give her a grant for the whole £10,000.

As a result, the Wrexham Rural CFR group has been able to purchase a Skoda Fabia estate car, meet the first year of annual running costs including tax and insurance, and pay for the car to be emblazoned with high-viz markings to ensure it can be seen easily when responders are out on a 999 alert.

During 15 years of volunteering as an unpaid Community First Responder, Effie has answered more than three thousand calls from her home in St Martin’s, responding to emergencies such as strokes, heart attacks and domestic accidents.

Though still based in St Martin’s, she switched earlier this year from a neighbouring ambulance service to become part of the Welsh Ambulance Service’s Wrexham Rural CFR team which covers the border area including Chirk and the Ceiriog Valley, and extending to Llangollen, Overton, Penley, and as far as Bettisfield and the outskirts of Ellesmere.

The move to the Welsh Ambulance Service Trust meant that she had to find a replacement vehicle, because although CFRs are given specialist training and supplied with medical essentials by the ambulance service, the volunteers still have to self-fund the cost of transport, uniforms, kit bags and equipment such as a defibrillator.

The car itself has been generously supplied by the Mitchells Group at Cheshire Oaks, and extra help has been given by Perrys of Gobowen and Ifton Garage.

“I’m enormously grateful to everyone who has made this possible,” said Effie. “I hadn’t expected to reach the target so quickly, let alone exceed it. The Lottery grant was an unexpected bonus and I’m deeply touched by the extremely generous response I’ve had from the community. Many people clearly realise the value of this service.

“The Covid lockdowns in Wales and England have meant a delay in putting the car on the road, but we in the Wrexham Rural team have been responding throughout the pandemic, using our own cars. Hopefully, the new car will be ready soon and it will make such a difference.

“As the first dedicated CFR car in Wales, it will enable a faster and more efficient response to calls because it can be loaded, packed and ready to go with all essential equipment, without having to transfer things from car to car, and running the risk of leaving something vital behind.

“Once the Covid crisis is over, the car will also be used when we are delivering CPR and Defibrillator Awareness courses in communities on both sides of the border once again.”

More information about Wrexham Rural CFRs can be found at https://www.wrexhamruralcfr.co.uk/