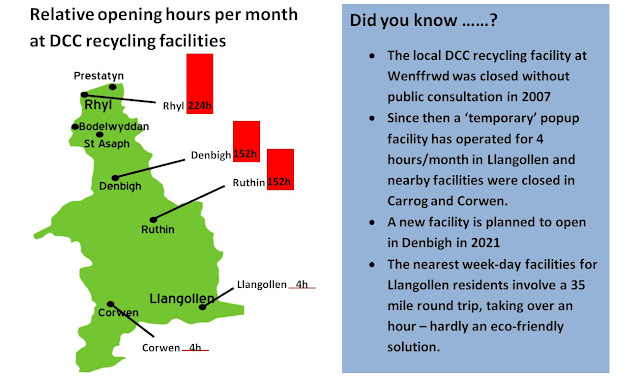 * A poster produced to promote the campaign.

A Llangollen resident has started a campaign – complete with petition – for the return of a recycling facility to the Dee Valley.

Phil Jones claims that while 13 years have passed since the closure of the old refuse tip at Wenffrwd off the A539 no action has been taken by Denbighshire County Council (DCC) on commitments to look for a replacement site or a joint deal with neighbouring Wrexham for Llangollen residents to use its Plas Madoc recycling centre.

He said: “Both the Welsh Government  and DCC trumpet their achievements in recycling, but this doesn’t match reality in the Dee Valley where we have been kept in the dark by DCC and our elected representatives.

“So, 13 years have passed and what has DCC achieved?

“No replacement site was ever found and facilities were closed in Carrog and Corwen. Plans are now in hand to build a new facility in Denbigh, though.

“Negotiations with Wrexham CBC fizzled out without a conclusion and no formal agreement for access to Plas Madoc was obtained.

“With covid restrictions we now have little or no recycling service in Llangollen, and Wrexham CBC has banned non-resident access to Plas Madoc.

“I asked one of our county councillors what officers were doing to address this problem and was told there was ‘no appetite’ to negotiate a deal with WCBC.

“This information was soon contradicted when I subsequently wrote to the Welsh Minister and to the chief executive of DCC. I was assured that DCC was more than willing to collaborate with its neighbouring authorities to negotiate cross border arrangements for such things as access to recycling sites.

“Happy to know that common sense had prevailed, I waited a month or two expecting that an announcement would soon be made. I heard nothing, so I wrote to both chief executives of DCC and WCBC. I have never had a reply from DCC but I did get a response from WCBC.

“They are open to negotiation of an access agreement, but of course DCC will have to pay for it. Nothing will be set up before April 2021, I am told, and then it must be conditional on DCC allocating the necessary funds required.”

Mr Jones added: “Based on DCC’s performance over the last 13 years I have no confidence that they will be resolving this issue anytime soon.

“And because of their inability to communicate with their ratepayers, I think it would be foolish to wait until April next year to find out whether they intend to offer a full recycling facility in the Dee Valley.

“As a first step we should ask our county councillors, Messrs Timms and Mile, to get the free collection of bulky waste items for residents in LL20 reinstated.

“In order to push DCC into action we have to start a campaign.”

He says a petition is now open for signature, either online at https://www.change.org/p/denbighshire-county-council-return-of-recycling-in-llangollen-and-the-dee-valley or in person at Watkin & Williams, Gwyn the Butcher, Lilly Rose Interiors, or Fouzi’s Cafe.

Mr Jones added that paper copies of the petition will be available for signature as an alternative to the online version at these shops in week commencing today (Sunday).

Posted by llanblogger at 7:13 AM