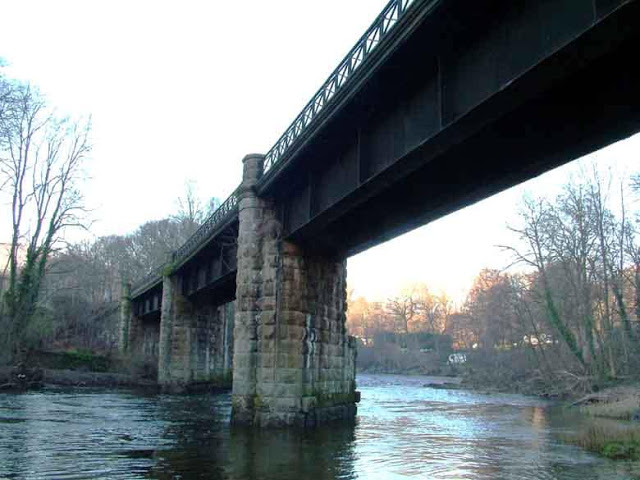 * The bridge over the River Dee which needs urgent repairs to its timbers.

The appeal launched by Llangollen Railway to repair a Victorian bridge vital to its running of trains is already half way to its target.

As llanblogger revealed, the railway put out the urgent call to its supporters during the last week of October for £15,000 to revive Dee Bridge, built in 1865 and now in desperate need of new timbers if it is to continue services next year.

In a Facebook post fundraiser officer Paul Bailey said: "If we are to run trains over the Dee Bridge next year we first have to renew the timbers on the bridge.

"This work, including purchasing the timbers, is costing £15,000 - monies the railway currently has not got.

"We have therefore launched an appeal to raise these monies without which we will not be able to carry out the necessary repairs to run train services in 2021."

Mr Bailey now reports "a fantastic response from our supporters."

And he said: "We have already reached half this amount in just one week but still require another £7.5k before we can order the timbers for this work to be done.

"Thank you to everyone that has donated to this appeal."

A railway spokesperson explained: "The bridge dates from 1865 when the line opened but is a remarkable survivor as the scrapman didn't demolish it in 1968 when the line was closed by Beeching.

"Without it remaining in situ the infant Llangollen Railway would never have got beyond Pentrefelin.

"The LR society, as it was, renovated it in 1984 with some grant aid as part of the extension to Berwyn.

"The need for renewal now is for the timbers which support the rails across the steel structure - a regular maintenance job.

"It is made more complex this time by the lack of income when no trains are running, with the appeal to members and supporters for cash to allow the expensive new timbers to be purchased ahead of replacement work in 2021.

"If anyone wishes to contribute to this appeal please contact me on 01490 450271, or email paulbaileywincham@yahoo.co.uk for payment methods."