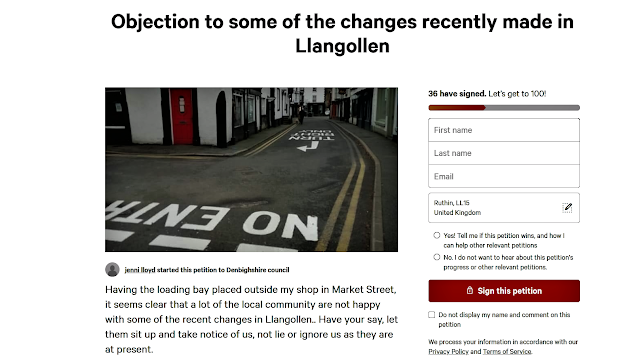 * The Change.org petition as it was on Friday morning.

As an online petition began to circulate criticising some of the moves, Llangollen's two county councillors have given their reaction to changes recently made to the town's traffic system aimed at making it for easier social distancing during the pandemic.

The petition, run through Change.org and intended to be sent to Denbighshire County Council, was started on Thursday by Jenni Lloyd who runs Jenni's shop in Market.

In the preface she says: "Having the loading bay placed outside my shop in Market Street, it seems clear that a lot of the local community are not happy with some of the recent changes in Llangollen.

"Have your say, let them sit up and take notice of us, not lie or ignore us as they are at present."

She says: "The lorries are 5ft from my window and it's fairly constant as the bay is servicing the whole of Castle Street.

"It is also to service the Town Hall so when they are putting up scenery or dismantling it for the shows its one heck of a trek.

I know my business will not survive with the loading bay where it is and I'm very sad about that.

"None of us where contacted by the council at any point."

In a joint statement the two Llangollen county councillors, Graham Timms and Melvyn Mile, said today: "In answer to the furore that’s setting Llangollen Noticeboard on fire, we are still in the grip of the Covid -19 pandemic, these measures have been put in place to make Llangollen safer, for both its residents and its visitors.

"Many of our older residents were in fear of their lives during the national lockdown. They chose to remain at home even when it was lifted, rather than venture onto Castle St and face the crowds of visitors. A petition in support of the changes to Castle St was signed by over 140 people and sent to DCC on 6th August.

The purpose of these measures is to ease the pressure on pedestrians in Castle Street.

"At the moment, due to the lockdown in England, our streets are empty and these measures appear not to be needed. That can change come December 2.

There have been some cavalier comments re the scheme, please remember that it’s only in place to keep us safer."

Cllr Timms and Cllr Mile said they had met with county officers on Thursday to discuss a number of issues regarding the introduction of the Covid changes in Llangollen.

Here they take the issues raised point by point:

"Will the temporary signs stay by the Hand Hotel?

"There are still a few vehicles that have been travelling down Church Street in the wrong direction, having not noticed the reversing of the traffic direction even with the extra signage. It is a genuine safety concern and needs to be aggressively signposted during the first few days and weeks of the scheme. The extra signage by the Hand Hotel is temporary and will eventually be removed.

"Will all signs be bilingual?

"By the end of next week, all signage in the town will be bilingual, as required by the Welsh Language Act. The carriageway signs on Bridge Street pose a problem because if they were bilingual the writing would have to start a few more metres before the junction. As a result, we have agreed that the white arrow indicating the right turn will stay, but the text will be removed. This change will also help to reduce the visual impact on the conservation area.

"Yes. Signs indicating this will be added to the current signage next week. It has been delayed because of temporary scaffolding on the Sun Inn on one side of the road. On the opposite side, the pole is not long enough to display the additional sign. A longer pole will be in place by the end of next week.

"We are continuing our discussions next week  with the Denbighshire Road Safety team about the position of this bay to see if there is a better solution that can be reached for all."

The councillors added: "Please get in touch with us if you have comments or suggestions about the changes. We listen and pass on your views on to the council on your behalf. Email us at the addresses below.