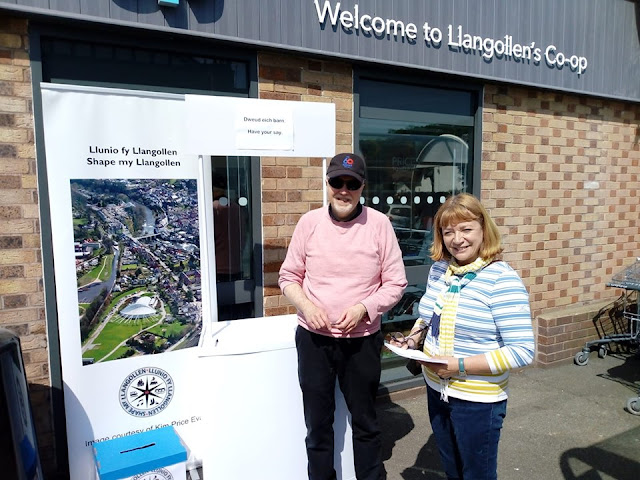 * In summer 2019 SML chair and vice-chair, Phil Robinson and Issy Richards, conduct  a public consultation exercise outside the Co-op in Regent Street.

The team putting together Llangollen’s official input into the county’s new Local Development Plan (LDP) has received a £3,500 National Lottery windfall to finish the job.

Shape My Llangollen was formed by the town council in 2018 to ensure Llangollen people have their say on the new masterplan for Denbighshire’s future up until the year 2033.

A team of volunteers embarked on an exhaustive round of public consultation to sound out local opinion on a range of key issues. 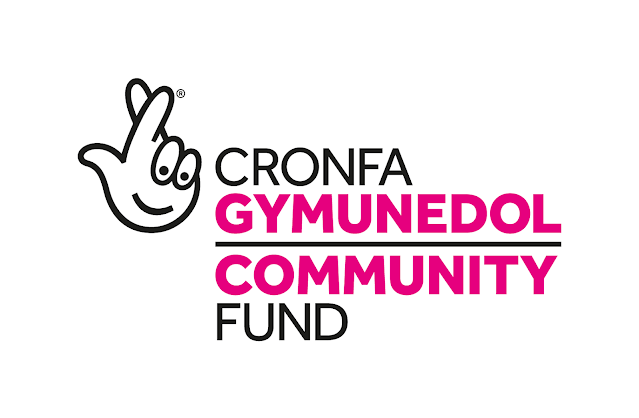 They eventually received over 1,700 separate answers on a very wide range of topics such as traffic and parking, the appearance of the town centre, local services and facilities and the environment.

The mass of evidence gathered has been constantly refined and will eventually be published in SML’s final report which will be subject to scrutiny by the town council before being submitted to the county council for incorporation into the new LDP.

Shape My Llangollen was just about to host its final round of public consultation when the country went into its first Covid-19 lockdown back in March.

Despite the need to observe social distancing SML’s work has continued, with its members getting together at regular online meetings.

However, a lay-off of over seven months put the work of the team way behind schedule, especially the completion of its final report, and so to bring it back on track members recently took the decision to employ specialist consultants to put their expert finishing touches to the project.

In a bid to secure the necessary cash to cover the cost of the consultants the team recently put in a bid to the National Lottery.

And it has just been given the good news that it has been granted £3,594 by the Lottery’s Community Fund.

This will go to cover the full cost of the consultants who are based in Powys and have done similar work for major organisations across Wales.

SML chair Phil Robinson said: “We are absolutely delighted that the Lottery has agreed to grant us this money which will now allow us to finish the job we started over two years ago.

“Like many organisations our work, which we believe is vital to the future of our town, was disrupted by the pandemic.

“In our case that was just as we were reaching the final furlong of what had been quite a tough exercise.

“We believe that our consultations with the public were the most exhaustive ever undertaken in Llangollen and resulted in over 1,700 separate answers to the questions we posed on what people liked and disliked about their town and the way in which they would like to see it go forward.

“We remain extremely grateful to everyone who took part in our question-and-answer sessions and now also to the Lottery’s Community Fund by granting us this fantastic sum which will help our work to be finished and our community to thrive.”