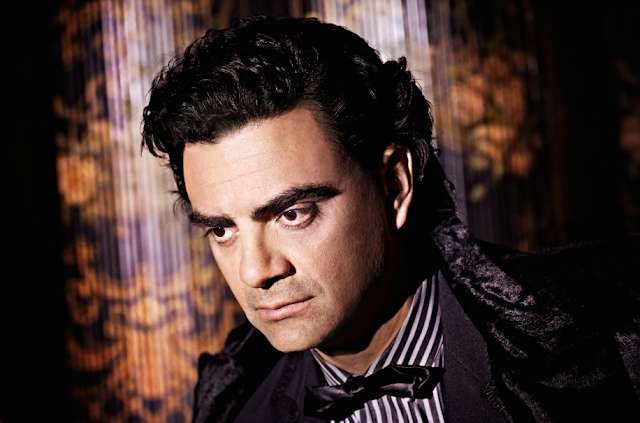 * Rolando Villazón will appear in the festival's classical gala.

One of the world’s greatest tenors is looking forward to his debut at an international festival in North Wales after being told by his friend Sir Bryn Terfel what a great event it is.

The acclaimed Rolando Villazón will be one of the star attractions at this year’s Llangollen International Musical Eisteddfod when he will also be following in the footsteps of one of his heroes, the legendary Luciano Pavarotti.

The Classical Gala evening on Tuesday, July 2, is being made possible thanks to sponsorship by the Pendine Arts and Community Trust (PACT).

PACT was set up by Mario Kreft MBE and his wife, Gill, the proprietors of the Pendine Park Care Organisation and it supports dozens of arts and community-based activities across Wales.

The following evening PACT will be sponsoring the competition for the world’s finest young singers when they will be vying for the title of Pendine International Voice of the Future during a concert also featuring popular soprano Shan Cothi and Welsh National Opera tenor Rhodri Prys Jones.

Meanwhile, last year’s winner, soprano Charlotte Hoather, will be taking to the stage with Rolando Villazón as part of her prize. Welsh lyric soprano Rhian Lois will also be performing.

Mexican-born Villazón, who lives in France and holds dual Mexican-French citizenship, can’t wait to return to “the beautiful land that is Wales” for what will be his first UK appearance of 2019.

He said: “I did not know a great deal about Llangollen and the festival but my great friend Bryn Terfel has told me what to expect and that makes me very excited.

“I have performed in Wales before, twice at the Bryn Terfel festival. I remember how the Welsh audience completely connects to what we, as performers, sing on the stage and that is so important.”

According to Villazón, he was honoured to have the chance to perform on the stage where Pavarotti first sang with his father’s choir from Modena in Italy in 1955 before returning in triumph 40 years later as an international superstar.

He said: “Pavarotti was unique and his voice was magical. And his appeal went beyond the classical world. But I can’t say he was the best, that’s not for me to say. I can’t say Plácido Domingo, for example, is not as good nor the great Caruso.

“Luckily, there is no need to decide for any single performer, we can celebrate all the great artists and what they bring to the art form.

“ I see my role as a performer to give my audience the best interpretation I can of the music and words that I sing, and to establish a unique bond with the audience every single time. I treasure this very much.”

Pendine Park’s Mario Kreft said: “It promises to be a wonderful evening of music and Gill and I are so looking forward to hearing Rolando Villazón perform. He is unquestionably a major talent and one of the very best tenors in the world right now.

“Gill and I want to support the Llangollen International Musical Eisteddfod as its ethos of peace and harmony through music and the arts is very important to all we do within the Pendine Park.

“The arts in general and music in particular provide the golden thread running through everything we do to enrich the lives of our clients and our staff.

“We are also very much looking forward to hearing Rhian Lois and Charlotte Hoather perform. Rhian has performed on stage at some of the world’s top opera houses, including Covent Garden. She is a real star in her own right and will undoubtedly perfectly complement Rolando Villazón.

“And as a previous winner of the Pendine International Voice of the Future competition, it will be wonderful to see and hear how Charlotte Hoather is progressing. Having an opportunity to perform on stage alongside a star such as Rolando Villazón is huge and can only be a boost to Charlotte’s burgeoning career.”

The festival’s musical director, Edward-Rhys Harry, added: “It promises to be a classical spectacular. We are so grateful to Mario and Gill Kreft and their Pendine Arts and Community Trust sponsorship. Without the support of sponsors such as Mario and Gill Kreft we simply could not dream of spectacular concerts of the highest standard such as we are going to enjoy.

“Rolando Villazón is a wonderful vocal talent who is undoubtedly one of the world’s best tenor voices and, with sopranos Rhian Lois and Charlotte Hoather and the wonderful musicians from the British Sinfonietta performing emotionally charged music, we are in for an evening and a concert to remember.”
* To find out more about the Llangollen International Musical Eisteddfod and for tickets please visit www.international-eisteddfod.co.uk