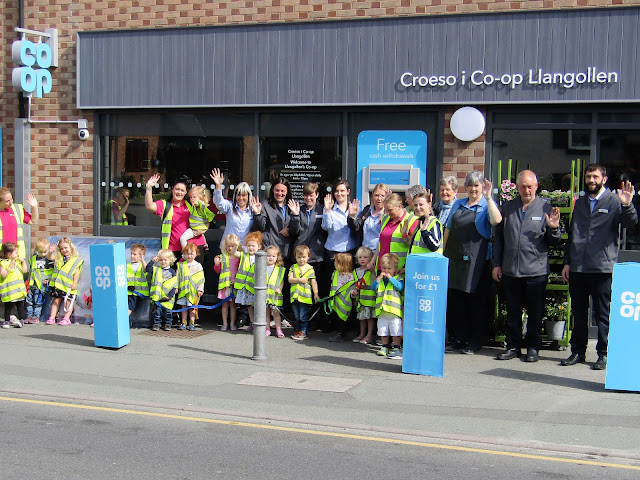 * The children of Cylch Meithrin Llangollen line up with staff
at the re-opening of the facelifted Co-op store.

The Co-op in Regent Street, Llangollen had its official opening this morning (Thursday) after undergoing a major facelift.

It has taken contractors six weeks to complete the refurbishment during which most of the shopfloor has been renewed with fresh shelving and tills.

There is also a new Costa coffee machine and a row of self-assisted tills have been installed.

The opening was performed by the children of Cylch Meithrin Llangollen, which is one of the local causes supported by the store.

Representatives of the other causes, Llangollen Panto and Clwb Y Berwyn, were also invited.

Local suppliers were on hand with samples including Henllan bread, Llaeth y llan yoghurts and Edwards of Conwy sausages.
Posted by llanblogger at 10:52 AM