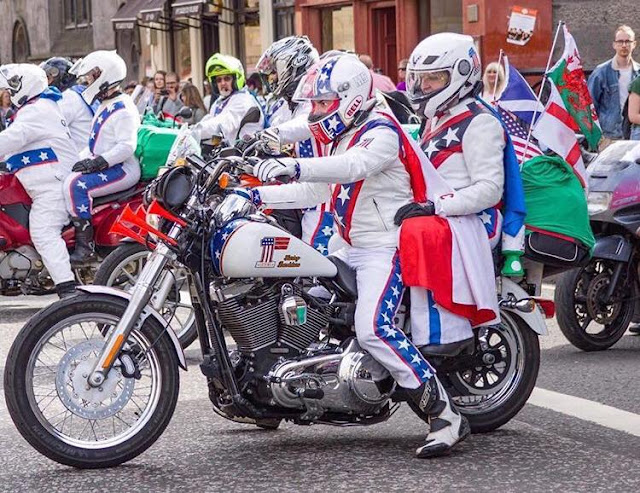 Two intrepid bikers from Llangollen are taking part in the eighth annual Ride Cymru which will see a fleet of like-minded riders dressed as 1970s motorbike stuntman Evel Knievel blast around the edge of Wales in aid of charity.

Malcolm Preston and Mark Realey are joining scores of others bike fans from the region in the event which starts off in Wrexham today.

The 1,070-mile route of the big ride clings to the Welsh side of its border with England as tightly as public highways allow.

It goes through back lanes, the odd navigable track and stretch of A road and also stops off at some of the premier motor racing circuits of Wales.

Riders, who have each had to raise over £100 in sponsorship, can opt to join for as many of the five day sections as they wish, or complete the full trip, which eventually ends up back in Wrexham on Bank Holiday Monday at 4.30pm.

Stereophonics star Richard Jones is planning to join Ride Cymru which also aims to set a new official record for the largest numbers of riders kitted out as Evel Knievel.

They will be flagged off from Wrexham High Street today by Len Lewis, an 89-year-old ex TT rider, and Wrexham Mayor, Cllr Mayor Andy Williams.

In Cardiff the riders will get to meet ITV weather presenter Ruth Wignall and their progress will be followed by Evel Knievel’s children.

Since the first Ride Cymru in 2012, the event has raised more than £80,000 for charity, with about £20,000 going to the Macmillan Cancer Support and about £3,000 to PAPYRUS prevention of young suicide charity, from this year's event.

Malcolm Preston from Pengwern in Llangollen said: “Myself and Mark Realey are both taking in the ride.

“There are 50 of us all riding the perimeter of Wales with lots of celebs meeting up with us along the way.

“So far this year as a group we have raised approximately £25,000 in sponsorship.

“The event is organised by Jas Lewis from Coedpoeth who has run several events of this nature raising in the region of £80,000 over the past seven years.

“We have a Facebook page which is Ride Cymru and a Just Giving page aswell.

“We are all dressed as Evel Knievel and we hope to break the world record for the largest gathering of Evil Knievels.”
Posted by llanblogger at 6:53 AM