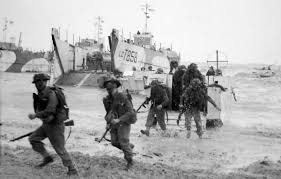 * British troops storm ashore on Gold Beach on D-Day in 1944.

Llangollen branch of the Royal British Legion is to hold a Remembrance ceremony to mark the 75th anniversary of the the D-Day landings in Centenary Square on Thursday June 6.

The standards of the branch and the RAFA Club will be on parade from 10.45am and the ceremony will include the sounding of Last Post and Reveille, the traditional two minutes' silence and the laying of wreaths on the 1939-45 memorial.

D-Day, on June 6 1944, was when the Allies launched an invasion across the beaches of Normandy to begin the liberation of Europe from the occupation of Nazi Germany.
Posted by llanblogger at 6:43 AM