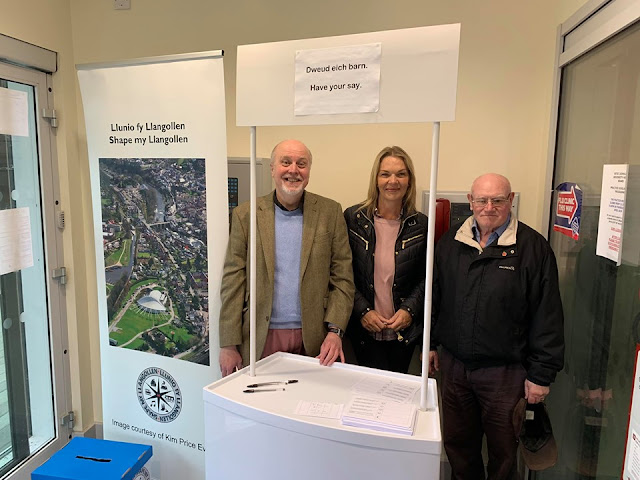 The first in a series of public consultation exercises by the team of volunteers putting together Llangollen’s contribution to the county council’s next Local Development Plan was a major success.

Yesterday, team members were on hand in the foyer of the town’s health centre and during busy morning and afternoon sessions spoke to scores of people to gain their feedback.

SML chair Phil Robinson said: “The day was a big success and we spoke to as many people as possible about a wide range of issues which interest them, which was anything from the state of local roads and pavements to the provision of social care and youth facilities.

“Perhaps not unexpectedly there were lots of concerns voiced about traffic congestion and the availability of parking. But lots of other issues were raised such as the spending priorities of the county council and public transport.

“The information we gathered will be invaluable in compiling out final report which we are aiming to publish before the end of this year.

“I’d like to say a big thank you to everyone who was able to spare a few minutes to answer our five quick questions.

“Our next two consultation sessions will be next Monday May 13 at the Co-op in Regent Street and then at Home Bargains on Thursday May 23, both from 10am-1pm and from 2-5pm.

“We hope as many people as possible will be able to come along to these and there will be further chances to speak to us as the summer progresses.”
The questions SML is asking are:

They can also jot down the answers in a reply to the posting about the health centre session on the Shape My Llangollen Facebook page.
Posted by llanblogger at 11:17 AM