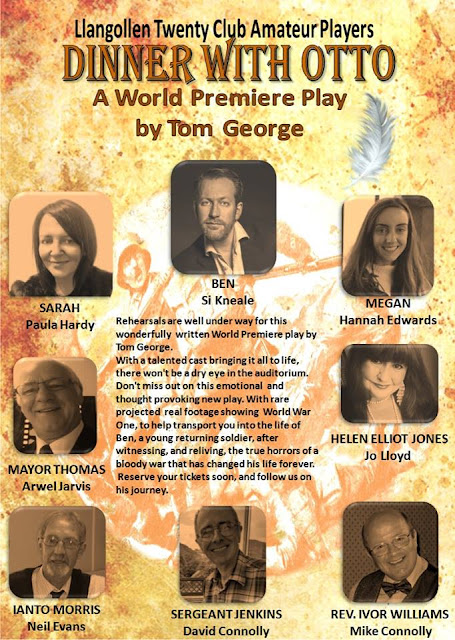 Llangollen Twenty Club Players are to stage the world premiere of a poignant new play about the trauma inflicted by the First World War.

Dinner with Otto, written by Tom George and directed by Lyn Aston, was due to open in mid-March but due to an unfortunate illness had to be postponed.

The play will now take to the Town Hall stage on May 30th, 31st and June 1st.

The action is set in March 1919 after the conclusion of the bloodiest conflict in history.

It tells the story of a young soldier, Ben, returning home to his mother and friends after witnessing the atrocities of war, and now having to live with a deep sense of guilt, and hopelessness for his future.

Ben had promised to protect his friend, Aled, who went to war with him, but Aled was killed, further adding to Ben’s sense of guilt.

On his return Ben’s mother sadly realises that he is not the same boy she waved goodbye to.

Ben shares some of what he witnesssed but his mother realises he has many other secrets that may affect the future course of his life.

With real footage of  World War One transporting the audience into a very dramatic, and to some, surprising end, it is sure to  keep you on the edge of your seat.

This is Ben’s story, a sad and haunted young man trying to come to terms and live with the trauma that impact of any war has on the returning soldier.

* Tickets are available from Courtyard Books, Gwyn Davies Butchers and Jenni's Llangollen, or
online: www.skiddle.com
Posted by llanblogger at 6:36 AM