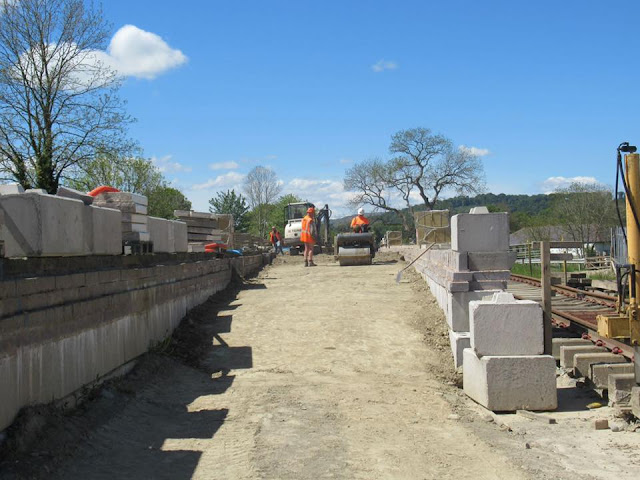 * Work proceeds on bridging the Gap on the line to Corwen.

As of yesterday (Tuesday) morning the infamous Gap along the Llangollen Railway line to Corwen has disappeared with a final session of dumping, layering and rolling in front of the gate.

Work has continued with infilling of the space between the platform walls now making progress and perhaps 80% complete.

The eastern end needs finalisation of the platform wall with blocks and overhang to achieve completion.


Meeting this challenge has been possible because of the many donations received towards the Tenner for a Tonne and the Infill the Gap appeals which, combined, have raised £23,000.

Railway spokesman George Jones said: "Thanks are due to all those who responded to the appeals for help from the project's fundraiser which has boosted the efforts of the volunteers engaged in the task and helped finance the assistance of a local contractor with his equipment and expertise.

"If you didn't quite get round to it, you can still make a donation as there are on going expenses to meet before the platform is complete and the track installed.

"Donations by CCRD can be made c/o Paul Bailey, 'Dolwen', Bryn Eglwys, Corwen LL21 9LY and will be gratefully received towards the work needed to finalise the station project.

"We are getting there and continued support will see the train arrive in Corwen - maybe within a few months time."
Posted by llanblogger at 10:33 AM